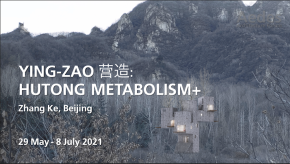 Zhang Ke uses the concept of metabolism to describe his work with hutongs, the historically significant courtyard houses typical of Beijing. He thus adheres to the idea of transferring the organic lifecycle of birth, growth and renewal to urban development and architecture. For transformative adaptations of the hutongs to contemporary uses, the architect has received the Aga Khan Award and the Alvar Aalto Medal. In addition to the hutong projects, the exhibition also demonstrates Zhang Ke’s great creative independence with projects such as the Xiao Feng Art Museum in Hangzhou, the Aranya Outdoor Theatre at the Great Wall of China. The office building for the Novartis Campus in Shanghai, completed in 2016, and the strong design for the Exilmuseum Berlin also show a deep intercultural sensitivity, reflecting Zhang Ke’s studies at Tsinghua University in Beijing and his training and teaching work at the Harvard Graduate School of Design.

Hutongs
Hutongs in Beijing, the traditional courtyard-and-alley systems of urban dwelling that are an essential aspect of Chinese cultural history, have recently been caught at the battleground between development, conservation and revitalisation. After two decades, many of the hutongs have been demolished due to urban infrastructure projects and increasing demand for high-density housing, or disfigured by kitsch renovations that feign a nostalgic past. 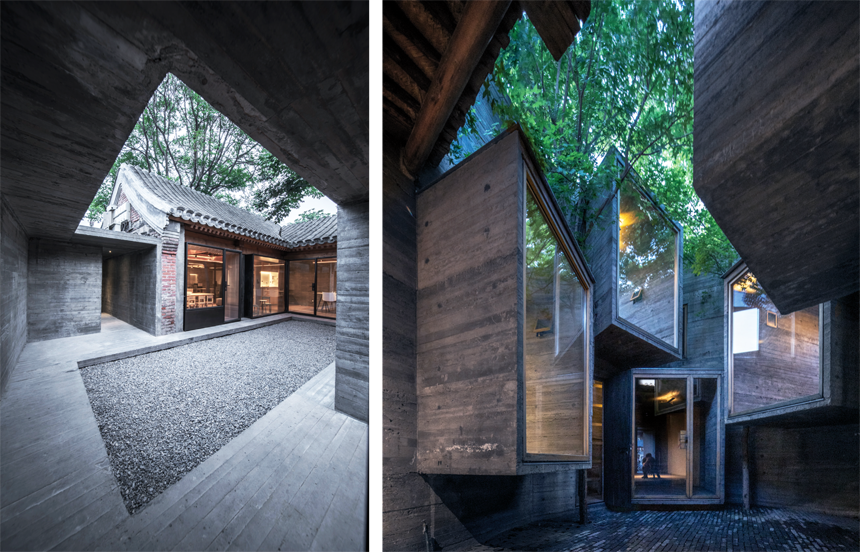 For several years, architect Zhang Ke has been exploring alternative perspectives on the hutongs, considering them as living organisms and studying them both in micro scale units and as macro scale infrastructures. His goal is to show how traditional courtyard properties can be adapted for the 21st century to fulfill their potential as generators of community spaces and catalysts of social interaction. The result is a series of architectural interventions that breathe new life into these historic residential neighbourhoods while preserving the significant monument value of these unique cultural artifacts.

Exhibition
With the exhibition YING-ZAO: Hutong Metabolism+, Chinese architect Zhang Ke and his firm ZAO/standardarchitecture present a series of realised projects related to this topic in Berlin, including the cultural centre Micro Yuan’er Children’s Library and Art Centre, the hostel Micro Hutong with its extremely dense urban conditions, the courtyard house group Hutong Rental Housing with its socio-cultural mix of tenants and the Co-living Courtyard used by a charitable educational organisation that provides daily programming for neighbourhood residents.

For Aedes, this is the second exhibition with Zhang Ke after Contemplating Basics in 2015, which, among others, presented a series of projects that are sensitively embedded into the Tibetan landscape. Aedes deliberately decided to re-exhibit two more of Zhang Ke’s projects that were already shown in 2015 when they were still in the design process: the Xiao Feng Art Museum in Hangzhou and the now realised office building for the Novartis Campus in Shanghai. What could previously only be contemplated as a design is now a built and lived reality and making it possible to ‘read’ his work in an urban context.

Featuring a variety of sketches, drawings and models, YING-ZAO: Hutong Metabolism+ also includes a number of other recently realised or currently under construction projects, such as the Rizhao Community Art Centre and Thermal Spa in Rizhao, as well as the Tree House and the Aranya Outdoor Theatre, both located at the foot of the Great Wall of China. In addition, Zhang Ke's strong and impressive competition entry for the Exilmuseum Berlin is presented in the exhibition.

About Zhang Ke
Zhang Ke is an attentive observer of individual and social behaviours and knows how to derive and spatialise the needs of future users of his architecture. His studies in Beijing and at Harvard in particular enabled him to acquire an extensive knowledge of the history and present of Eastern and Western cultures. He has developed these ingredients into an independent formula for modern architecture that is distinguished in both cultural realms by an unobtrusive presence and characteristic approach. His creative independence, clear design vocabulary and intercultural sensitivity make him one of the most remarkable representatives of contemporary Chinese architecture.

The exhibition and catalogue mark a special moment not only for Zhang Ke, who established his studio ZAO/standardarchitecture in Beijing in 2001, twenty years ago. 2001 was also a memorable year for Aedes, since that was when it presented the still young, independent avant-garde of Chinese architects to the world for the first time with TU MU. This exhibition provided a crucial impulse for the international perception of Chinese architectural culture and for the significance and confidence of the profession in China itself. For Aedes Architecture Forum in Berlin it was the start of a particularly friendly and fruitful relationship to the architecture scene in China that continues until today.

An Aedes catalogue with texts by Martino Stierli, Marc C. Fishman and Eduard Kögel will be published.