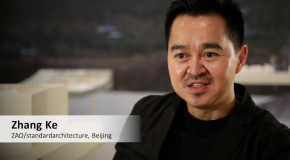 
In the context of the exhibitions on new architecture in the South Tyrolean Alps and the work of ZAO/standardarchitecture from Beijing in the Tibetan Yarlung River Valley with an inside view on plans for the Bumthang Valley in Bhutan, the symposium will address crucial questions about tourist infrastructure and its impact on landscape, economy, culture and people’s lives.

Complementing the ANCB symposium, which will focus on the theme of building for sustainable tourism, ARCH+ features with Zhang Ke will introduce by means of the projects in the exhibition the overriding architectural thinking behind them and the conditions of contemporary architecture production in China.

Aedes Architecture Forum in Berlin will mark the beginning of its 35th Anniversary Programme for 2015 by continuing its focus on Asia and China. With the architect Zhang Ke from Beijing, Aedes presents one of the most promising protagonists of a young group of Chinese architects and urban planners. This follows on from the 2001 exhibition ‘TU-MU’, in which Aedes presented for the first time, and with global success, the first generation of independent architects in China. At that time, the architects and artists introduced in the exhibition, Yung Ho Chang, Liu Jiarkun, Ai Wei Wei, Wang Shu, Lu Wenyu, etc., were fully unknown in the West, while some have since gone on to become Pritzker Prize winners or internationally known artists.

The exhibition ’营造 Contemplating Basics’ shows the methodology and work of ZAO/standardarchitecture, founded in 2001 by the architect Zhang Ke in Beijing, China. The office represents the protagonists of contemporary but localised architecture in and around China. The variety of projects includes exposed small-scale interventions and large museums in the urban context as well as sensitively integrated buildings for tourism in landscape settings of Tibet. With reference to the specific context, the office seeks local solutions, connecting traditional culture and contemporary means – the pioneering architecture acts as an agent between the desire for the modern and respect for local values.

The first part of the exhibition focuses on minimal interventions in Beijing, like the preservation of the last remaining piece of the City Wall that represents the traces of time in it’s cleared layers. The project Micro-Hutong from the year 2013 shows a small-scale densification in existing traditional courtyard districts in Beijing. By means of a low-cost construction, the space was extended and radically renewed. In the 2014 completed project for an Art School at Cha’er Hutong, the local practice of informal small-scale additions within courtyards was adopted by the architects through boxes, implemented like furniture in the open space. The new Xiao Feng Art Museum in Hangzhou and the museum for Le Corbusier in Shanghai are currently in a planning stage, whereas a large building at the Novartis Campus in Shanghai is near completion. With provoking proposals like ‘the vertical villages’ in the countryside, Zhang Ke stirs up relevant debates about topics of densification and shortage of arable land.

The second part of the exhibition presents works by ZAO/standardarchitecture in Tibet that seek to accomplish the balancing act between the need for tourism facilities and a sustainable development to preserve the environment. In the Yarlung Tsangpo River valley, Zhang Ke and his team have been working since 2007 to develop comprehensive solutions for the sudden increase of tourist numbers. The impressive backdrop of over 5,000 metre high mountains combined with a rough river landscape has shaped a characteristic building tradition in this part of Tibet over the centuries, compromised today by new means of communication and the pressure of economy. The work of ZAO/standardarchitecture draws on traditional craft techniques while combining it with a contemporary architectural language. The building volumes, infrastructure improvements and their related functions are integrated into the Tibetan landscape with ramps, terraces or split geometric volumes. The use of vernacular materials allows the architecture to merge with the setting. Examples, like the visitor centres in the Tsangpo Canyon and the Niyang River or the Yarlung Tsangpo Grand Canyon Art Centre, show how even large scale projects can be perfectly integrated into their surroundings. Carefully detailed natural stonewalls, timber interiors and smooth plaster generate contrasts between inside and outside. The local aesthetics are connected by the haptic quality of the surfaces and the continuity of the materials for paths, plazas and walls.

ZAO/standardarchitecture has applied basic local principles as surprising gentle solutions. In the work of Zhang Ke the local and the contemporary meet in a creative process, promoting a distinct, discrete modernity that embraces the potentials of local craftwork for new solutions. 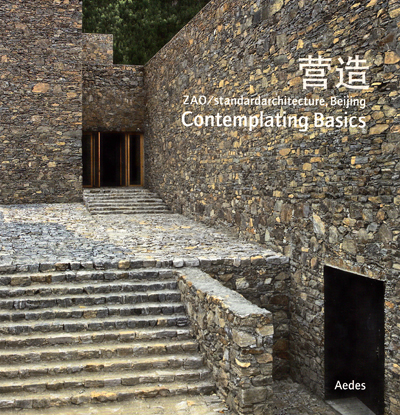