Flat Lands & Massive Things - From NL to NYC & Beyond 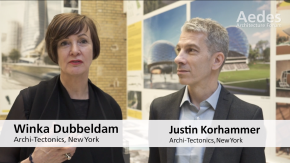 Archi-Tectonics was founded by Dutch architect Winka Dubbeldam in 1994 with offices in New York City, the Netherlands and China. She and Justin Korhammer, Partner since 2016, collaborate with a diverse team of designers, engineers, consultants and contractors on multiple scale projects, spanning from city plannings and buildings to interiors and design objects. Their award-winning work is widely known and recognised for its use of hybrid sustainable materials and smart building systems as well as its elegance and innovative structures.

Insights and Outlooks
The exhibition will give an insight into the methodology and creative cogitations of Archi-Tectonics, combining the use of latest digital technologies with philosophical approaches that made the office one of the leading teams in the field of research and innovative building design worldwide. The 497 GW apartment building in Soho/New York, completed in 2004, was one of the first realised projects to utlilise parametric design and production techniques.

From "Flat Lands & Massive Things - From NL to NYC & beyond" documents how the influences of her Dutch-American biography are consciously or unconsciously reflected in her work. Winka Dubbeldam studied architecture at the Institute of Higher Professional Architectural Education, Rotterdam and at Columbia University in New York where she established her own firm. Winka Dubbeldam is currently also Chair and Miller Professor of Architecture at the Department of Architecture, University of Pennsylvania, Philadelphia and an External Examiner at the Bartlett School of Architecture, London.

The Netherlands and New York City, despite their obvious differences, share some significant contextual similarities. Both are characterised by their flat landscape and predominance of the waterfront, and they consequently face the opportunities, as well as the risks of this exposure. In this context the strategy of Archi-Tectonics has been to create a tangible, artificial topography by setting "objects" in the flat city fabric. The arrangement of buildings, which develop from the horizontal to the vertical, thus create urban landmarks in the urban space. This becomes evident in projects like the Blaak Tower in Rotterdam or the project for the Houthaven Pier Towers near Amsterdam. These tall, sculptural buildings in the lower built environment of Rotterdam and at the harbor in Houthaven create significant architectures that give these places a new urban identity.

Another focus is on innovative housing, which is a high priority in both New York City and the Netherlands. Optimal spatial formations include: GT House Residence in Upstate New York (2003), Chelsea Townhouse (2012), V33 Condominiums (2012), GW497 Residential Building (2013) and the Brewster Building (2013) all in New York City.

Internationally, Archi-Tectonics has built several commercial spaces, such as the ’Ports1961’ stores in Paris, London and Shanghai. New York City projects include the Gear magazine offices (1999), the Duggal Digital Headquarters (2000), the Netherlands Board of Conventions and Tourism (2009), the Moooi Headquarters (2015), and more recently Inscape, a new Meditation Studio (2017). In 2018 Archi-Tectonics won the ’Asian Games Sports Park Competition’ for two stadiums, a shopping mall, a fitness- and a visitor center as well as a vast landscape park for the 2022 Hangzhou Asian Games, China.

Research and Methodology
The design strategy of Archi-Tectonics is close to industrial design, where high precision and the search for the perfect “fit” is an essential tool of the innovative process, always also approaching the notion of invention. Therefore Archi-tectonics’ process is to model, to test, and improve, to IN-form the design process, not to RE-present the design outcome. They note: „As architects we often undervalue the inventiveness of industrial- or car design, but we believe that we as architects can and should learn from this high-level design precision, and the interest in for example the UNI-body in cardesign, or the integration of design and technology in industrial design. We value ’per-formance’ over form, design intelligence over style.“

This strategy explains their affinity to the notion of ‚objects’, which was long discussed by theories of the mathematician and philosopher Edmund Husserl as described in the “Origin of Geometry” of 1937. Derrida’s eleborate and in-depth reflection on and introduction to Husserl’s ”Origin of Geometry” describes this as follows: “This is because the mathematical object is ideal. Its being is thoroughly transparent and exhausted by its phenomenality. Absolutely objective, i.e., totally rid of empirical subjectivity, it nevertheless is only what it appears to be.”

Awards include the Emerging Voice award (2001), and Winka was among Esquire magazine’s Best and Brightest in the Genius Issue (2004). She was named one of the DesignIntelligence 30 Most Admired Educators in 2015. Archi-Tectonics won the IIDA / Metropolis Smart Environments Award (2006), won the Design Competition for a Sustainable Neighborhood Staten Island, New York (2008), the Hommes Award (2011), Rotterdam, and the 5.5 million s.f. Yulin Art District Design (2012) in China. Archi-Tectonics’ Greenwich Building was honored in the Built by Women New York City Category by the Beverly Willis Foundation and the AIANY (2015). Wired magazine nominated Archi-Tectonics’ meditation center Inscape as one of the 25 best International Architecture projects in 2016.