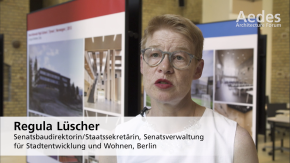 Opening Conference
Monday, 24 June 2019, 2-6.30pm and Tuesday 25 June 10am-6.30pm
Programm and more Infos
The number of seats is limited. We would ask for a mandatory registration.

The construction and design of school buildings in Germany faces major challenges. Particularly in metropolitan areas, student numbers are continuously rising and, according to all forecasts, population growth is set to continue in the coming years. This is why new school buildings, including extensions and renovations of existing school buildings, are one of the central topics of investment policy throughout Germany today. In Berlin alone, additional space for around 70,000 new school children will be needed by the 2024/25 school year. Approximately 5.5 billion euros will be spent from 2017 to 2026 on the refurbishment and/or expansion of existing schools; about 40 new school buildings will be erected.

Against this backdrop, the exhibition initiated and curated by Beate Engelhorn at Aedes Architecture Forum presents 12 contemporary school buildings in Europe that are exemplary for the implementation of current educational and urban planning models. The exhibition will be introduced by a two-day conference with numerous contributions from experts from Germany and abroad.

The school as an institution is increasingly changing in response to growing needs, for example, longer hours of care including homework supervision, up to models as an all-day school, that becomes a learning and living space providing also social education and support. In addition, the program of schools has become more diverse. Besides to modern technical equipment, schools today often have extracurricular offerings in music, literature and sports. Contemporary school buildings must not only have flexible spaces indoors but also outdoors, for various open-air and sports activities. It seems undisputed that spatial conditions have an effect on the behavior and performance of school children, so that space is frequently referred to in school education as a “third teacher”.

In addition to the school’s internal tasks, school buildings are increasingly assuming an important function in urban planning. They often provide community space, offer public access to their library, sports, and leisure facilities, and are used as a social space and gathering place for residents in the city neighborhood or rural community. The specific climatic conditions and geographical locations of the schools presented required different construction methods and technical features, which led to some of the unique aspects of the individual building projects.

In order to address social change and growing awareness of the central importance of education, it is essential for school buildings to adapt to new educational concepts and the needs of modern, internationally competitive education standards. The exhibition and conference explore common strategies for future school design in dialogue with international experts.

- How should and must schools look like today?
- What kinds of spaces should school buildings provide?
- How should classrooms and common areas be designed?
- How can a school building be cleverly integrated into the urban or rural environment?

The exhibition features 12 international examples of contemporary school buildings from 11 European countries, whose multifaceted offerings invite visitors to reflect broadly on school architecture. Rounding out the exhibition program are research projects from a seminar on historical school buildings, learning, and teaching concepts at the Technical University of Ostwestfalen-Lippe under the guidance of Prof. Dipl.-Ing. Tillmann Wagner and Prof.-Vertr. Dipl.-Ing. Constantin von der Mülbe.

The exhibition has dedicated Facebook and Instagram accounts, where examples of contemporary school architecture and design will be presented for public discussion. Contributions and comments can be found and submitted on both platforms at: #aedesfutureschools.

PROJECTS IN THE EXHIBITION

The Hessenwald School is located in a forest clearing near Weiterstadt (Darmstadt). The cooperative comprehensive school for 700 students is based on the educational concept of “learning houses”, which enables students to move between different types of learning environments. The new school complex is divided into three pavilions connected by a three-story hall. The ground floor holds music and theater rooms, technical classrooms, the library, cafeteria, and staff rooms. The individual room units within the school can be flexibly linked and adapted according to the needs of the users.

The school building is made up of terraced, single-floor, narrow building strips, which follow the topography of the slope over 35 meters in height and connect to form a large “spatial landscape”. The green roofs of the school offer a bird’s eye view of a planted hill. The school’s educational focus is on electrical engineering, energy technology and environmental technology, so there are also technical workshops and labs addition to regular classrooms. The school’s various sports facilities are available to the public and used for national and regional events.

The new school building is located at the base of the foothills of the Sierra de Guadarrama in northern Madrid. The school has a kindergarten and elementary school as well as a high school. In addition, the school offers a public education program, evening concerts, and theater performances for the local residents. Thanks to its many possible uses, its spatial relationship with the surroundings, and the diverse opportunities it offers for encounter, the school is an important element in the neighborhood for cultural and social exchange.

The new Nord-Østerdal High School is located on the outskirts of Tynset, a small municipality with about 5,500 inhabitants, and draws students from a wide radius. The school curriculum combines high school with an integrated vocational training program for students aged 16 to 19 years. The diverse educational offerings are reflected in the school’s multifaceted spaces. There are various large rooms for the different learning groups, workshops for woodwork, car repair, and electrical installation, a black box theater for dance and other performing arts events, a large auditorium, a restaurant-sized kitchen, and much more.

The European School in Copenhagen is located in the Carlsberg District – a former brewery site dating back to the mid-19th century. The new buildings of the school were inserted between existing historic buildings and grouped around a shared central space. The school’s playfully designed outdoor area is an eye-catching urban landmark, which connects the school with the adjacent neighborhood by means of a publically accessible and jointly used sequence of spaces in the former industrial complex. Courtyards, green spaces, and the roof of the sports hall are freely accessible at various heights. The classrooms themselves are designed as a flowing “learning landscape” to support social interaction between students and teachers.

The building for Lehtikangas School and kindergarten was designed for children aged 1 to 16 years. The spatial program was supplemented with further public functions that can also be used by the surrounding neighborhoods, such as a cafeteria, a local library, and a multifunctional sports hall. The flexible, open layout of the rooms supports current teaching methods in Finland: students from both the primary and secondary schools can work together in groups in without age restrictions. Light-colored walls with birch detailing foster a bright, calm learning atmosphere.

Hackney New School is a state-funded, free school consisting of a secondary school and a primary school for about 700 girls and boys, aged 4 to 11 years. The school ensemble includes a former telephone exchange building on Downham Road, which was renovated and now contains classrooms as well as seminar and storage rooms. New buildings were added around a central courtyard with games and sports facilities, with a multi-purpose area for a restaurant, music and theatre performances, science labs, a library and classrooms. The building for a new primary school on the opposite side of the street is currently under construction.

The school is located in Colombes, a suburb 10 km northwest of Paris. The building complex houses a lively, multifunctional spatial program: two separate schools, consisting of a preschool and an elementary school, for 500 children aged 3 to 11 years, with numerous indoor and outdoor play and exercise areas. The public areas include a cafeteria, library, a center for continuing education, and a fitness studio for adults. A tram station, which already existed on the site was integrated into the building. The school architecture contrasts with the surrounding buildings in the neighborhood with its colorful new landscape.

The new building in the Rivierenbuurt district south of The Hague is not only a school but also a cultural center and a meeting point for the neighbourhood located between the city center and the main railway station. In addition to an elementary school, the elongated, three- and four-story building is home to a children’s daycare center, a social welfare facility, a medical and community center, and several sports clubs. All of the public spaces are located in the eastern half of the building; all of the school’s rooms, which are locked once the class is over, are in the western half of the building. The two sides are connected by a common multifunctional atrium/foyer, which also leads to the roof terrace. The front of the building faces a public park area with sports and playground facilities.

For the new use of the Sint-Lievenspoort Institute as a school for students with hearing and visual impairments as well as autism, the 140-year-old monastery in the center of Ghent was renovated and converted. A diagonally aligned extension for the auditorium in the inner courtyard serves as an orientation point. Its green roof can be used as a terrace and, together with the planted garden, forms the green heart of the school. The new glazed portico in front of the historic facade supports the visual and physical relationship between the interiors and the courtyard. Special emphasis was placed on the haptic and acoustic quality of the materials in order to support the school children’s spatial orientation.

The school complex in the Rhone Valley was designed to be used by the five villages of Icogne, Lens, Chermignon, Chermignon-d’en-Bas, and Montana, and is located on the main road 210, which connects all the villages with each other. In addition to the elementary school with nine classrooms, a nursery school, and the cafeteria, the complex also includes a combined sports and multipurpose hall, which is also used for concerts, theater, and other joint village events. The schoolyard also serves as a new communal “village square” for the residents and offers wide views of the mountain landscape.

The Sonnwendviertel educational campus offers a common educational and spatial concept for children ages 0 to 14 years. The aim of the City of Vienna was to build a modern educational institution that would enable independent and project-based learning across different age groups and thus promote an individualized approach to learning. The school is organized in spatial “clusters” which are grouped around a common center – the so-called “marketplace”. Each cluster contains four classrooms, a project space, and a team room for the teachers, as well as assigned terraces and garden areas that can be used as open-air classrooms. 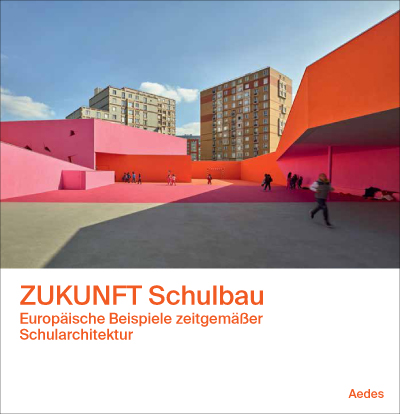 The exhibition and conference are made possible with support from

The exhibition installation is supported with objects by

We are delighted to collaborate with our media partner