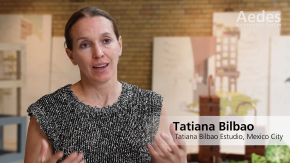 An Aedes catalogue will be published

How do we want to build, live, dwell and work together - not only in the future, but already now? Mexican architect Tatiana Bilbao has been pursuing this question for over a decade with her interdisciplinary office Tatiana Bilbao Estudio. She strives her vision of coming together beyond mainstream and star cult and understands architecture as a common platform for all those involved in the design as well as the use. She designs, plans and builds with empathy, attitude and responsibility. "For this holistic approach to architecture, her unyielding commitment and her inspiring way of working", she is now being awarded the AW Architect of the Year 2022 prize. En Común, which translates as 'together', is reflected in the exhibition in eight international projects, including a conceptual home and a monastery in Germany. The exhibition emerged from the collaboration with German AW Architektur & Wohnen magazine and the Aedes cooperation partner CEMEX.

Tatiana Bilbao and her team repeatedly relate the variously defined ways of coming and living together as well as the special relationship between public and private space. The title of the exhibition also refers to the way in which projects and designs are created in cooperation with clients, users and other architectural offices. Bilbao maintains an overview of the urban fabric, complements (urban) landscapes with buildings and squares, and never loses sight of the detail and appreciation of historical structures and materials. Sustainable building methods and techniques play just as important a role as the social aspects of architecture and the collaboration with other (landscape) architecture firms and artists in the development of concepts. Tatiana Bilbao creates cultural and social values on different scales in both urban and rural contexts.

"A city unites an infinite number of cities, each of which is shaped by its inhabitants and the spaces created within it. Every pavement, every street lamp, every building defines the city. In this respect, every moment of encounter and togetherness also defines the city. It can be in the park, at the market, in a laundry or school," state Tatiana Bilbao and Ayesha S. Gosh, architect at Tatiana Bilbao Estudio. With their projects, they create exactly these spaces: precisely those in which users and residents organise themselves and live and work together. 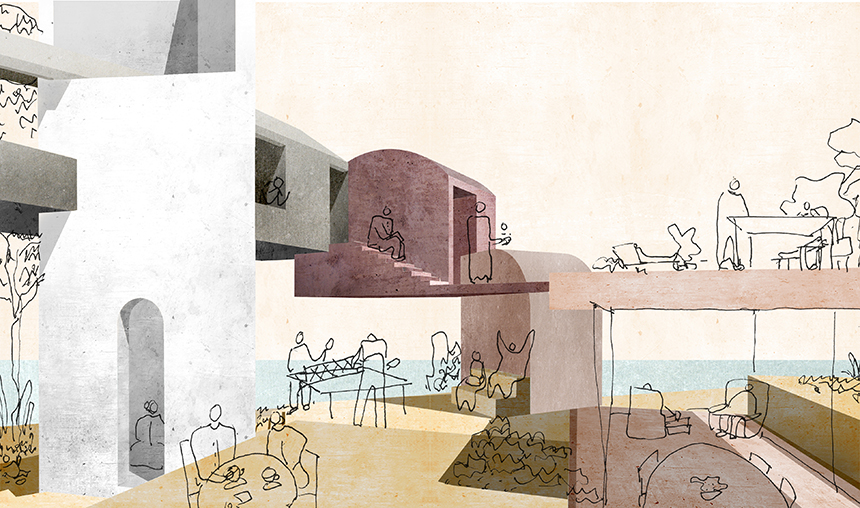 En Común shows eight exemplary projects as a reference for the office's way of working, using models, collages and large-scale hand drawings created collectively. Spacious models made of concrete, rammed earth, wood or brick confer the materiality and atmosphere of the projects, some of which are in the planning stage and others, which have been realised. Accompanied by texts and photographs, reproduced hand drawings by the architect convey her working methods.

Maria Friedenshort Monastery / Neuzell, Brandenburg, Germany / in planning
On a former conspiratorial site of the GDR State Security in Treppeln outside of Neuzell Tatiana Bilbao Estudio, in collaboration with MAIO Architects and DOGMA Architects, is designing the first new monastery building of the Cistercian Order in Brandenburg since the Middle Ages. In several construction phases, a contemporary translation of the Cistercian ideal plan is created. Starting from the quadrangle of the monastery church, the planning "ad quadratum" defines the proportions and positions of the various areas, squares and rooms of the complex. The quadrum of the cloister, centre and intersection of the axes, is increasingly broken up in the guest, youth and work areas.

Ways of Life / Village development project in Scheid, Hesse, Germany / under construction
Ways of Life is a residential building in rural northern Hesse with a close connection between living and working. Six unique spaces are arranged in a spiral, with the more public ones at the bottom and the more private ones at the top. A semi-roofed communal gathering space is created below the floating volumes. The design was created as part of a collaborative project also called Ways of Life with other international architectural firms, each designing an experimental and eco-friendly house and/or outdoor space. The aim of the project is to provide an impulse for the sustainable development of the village of Scheid in Hesse. A selection of the designs will be realised step by step, including the design by Tatiana Bilbao Estudio. Other members of the project are Anna Heringer (Germany), Christoph Hesse Architects (Germany), Dogma (Belgium), The Open Workshop (USA/Canada) and Pezo Von Ellrichshausen (Chile), among others.

Collegium / Conversion of an abbey into a cultural centre in Arévalo, Spain / in planning
Collegium is the design of an exhibition venue on the historically and culturally valuable grounds of a monastery in Arévalo. The volumes designed by Tatiana Bilbao Estudio, inspired by building compositions mentioned in ancient writings, will expose the Adrastus Collection and complement the historic buildings to create a cultural centre. The result is a patchwork between the old and the new, in which visitors discover each space of the complex little by little.

Estoa - UDEM / Building for the campus of the University of Monterrey, Mexico / completed
The completed building Estoa - UDEM combines rooms for students, business premises, service offices, rooms for education and a parking garage as the entrance to UDEM (Universidad de Monterrey) campus. The compact architectural composition allows for extensive green spaces. The design thus follows the vision of UDEM's masterplan to create a pedestrian friendly campus and green lung for the western area of the Mexican city of Monterrey. Estoa - UDEM has been certified "LEED Gold" by Leadership in Energy and Environmental Design (LEED), a global green building classification programme, the 2021 CEMEX Building Award in the Sustainable Building Mexico Edition category, and the 2021 USGBC Leadership Award by U.S. Green Building Council.

Olive West / masterplan and residential building in St. Louis, Missouri, USA / in planning
The Olive West masterplan by Tatiana Bilbao Estudio, commissioned by Emily Rauh Pulitzer, philanthropist and founder of the Pulitzer Arts Foundation, describes a densification project with town houses and garden houses adjacent to the centre of St. Louis in Missouri. Point of origin was the need for both quality housing for incoming Millennials and Elderly and for open spaces for community activities, partly with reference to the cultural institutions in the vicinity: the Contemporary Art Museum St. Louis, the Pulitzer Arts Foundation and the historic Wolfner Library. The individual residential buildings are designed by a number of internationally renowned architects, one by Tatiana Bilbao Estudio, with a special building concept focussing on climate conditions. Other forward-looking residential visions are being realised by MOS Architects (USA), Mitchell Wall Architecture & Design (USA) and Estudio Macías Peredo (Mexico), among others.

Porte de Montreuil / Project for sustainable neighbourhood development in Paris, France / in the planning stage
Between the centre of Paris and the suburbs, cooperative project weaves the adjacent neighbourhoods together. Situated as a lid on a motorway, the masterplan replaces a multi-storey car park with a plaza for pedestrians, a flea market, green spaces and various opportunities to meet and interact. Tatiana Bilbao and her team designed two high-rise commercial buildings together with Atelier Gorges (France) that could be flexibly converted into apartments in the future. The ambitious goal of Porte de Montreuil is to become the first carbon-free neighbourhood in Paris. Other buildings of the project are designed by Serie Architects (UK, India) and Bond Society (France).

Solo House / Holiday residence in Aragón, Spain / design concept
Situated on a former agricultural plateau with olive trees and a traditional stone house in the Spanish region of Aragón, the Solo House is designed as a place to experience architecture. The building was created as part of the eponymous project by international architectural firms for special holiday homes. The Solo House is made of 23 identically sized cubes with individually shaped openings. The cubes are distributed around the site and can be reached via promenades, allowing architecture to be perceived in different ways. 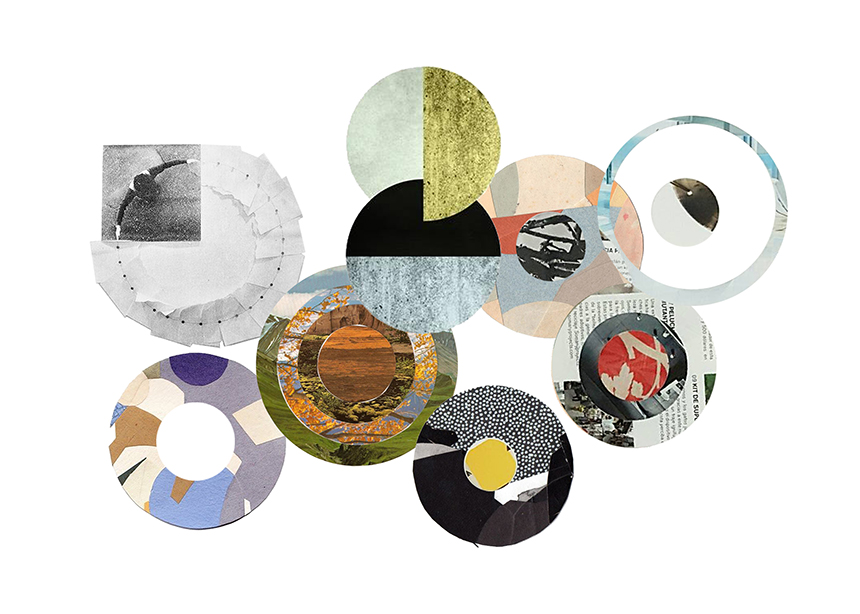 Born in Mexico City in 1972, the architect receives worldwide attention and recognition for her design and planning approach, her socio-political research, her studies on materiality and construction techniques, and for the projects realised by her practice.
In 2019, the Aedes Architecture Forum presented Two Sides of the Border, a collective research of 13 universities in Mexico and the United States. Bilbao led the study of spatial relationships and mutual cultural influences north and south of the Mexico-US border.

Tatiana Bilbao Estudio is an architecture firm founded in 2004 in Mexico City. The studio's work focuses on analysing the context in which the projects are set from a multidisciplinary perspective. The projects range from master plans to affordable housing projects. One of the aims of her work is to contribute to the respective environment while remaining flexible to address the ever-changing needs, as well as to integrate social values, collaboration and sensitive design approaches into the architectural work. Prior to founding her practice, Bilbao was an advisor in the Ministry of Development and Housing of the Government of the Federal District of Mexico City, during which time she was part of the General Directorate of Development of the Urban Development Advisory Board in the city. Bilbao was named an Emerging Voice by the Architecture League of New York in 2010, awarded the Berlin Kunstpreis in 2012, the Global Award for Sustainable Architecture by the LOCUS Foundation in 2014, as well as the Impact Award 2017 Honorees for Architizer A+Award, the Marcus Prize Award 2019 and the Tau Sigma Delta Gold Medal of 2020. 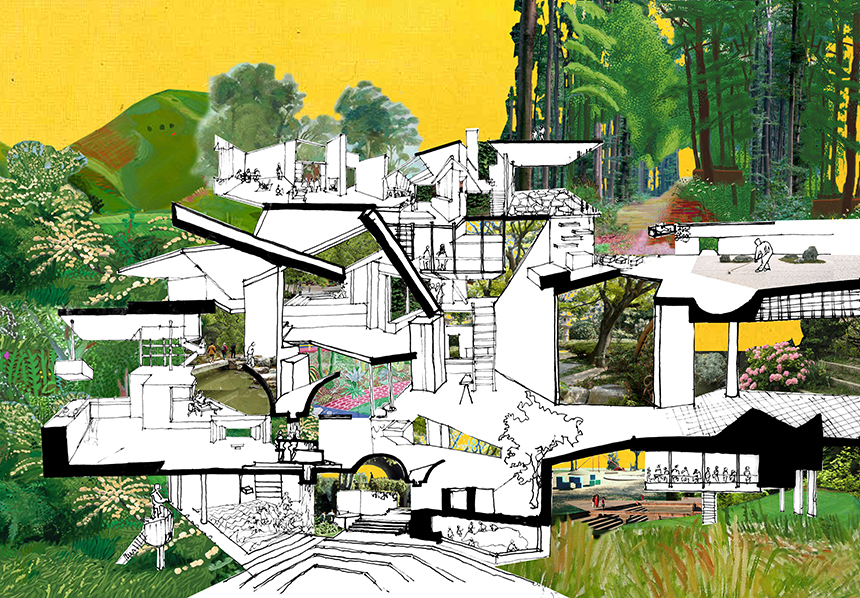 "The diversity of people and the diversity of life are reflected in Tatiana Bilbao Estudio's projects. This makes the Mexico City-based urban think tank a role model for young architects around the world," says Karen Hartwig, Editor-in-Chief AW Architektur & Wohnen, praising the work of the Mexican architecture studio. With the AW Architect of the Year award, the Hamburg-based architecture magazine has annually since 2012 recognised the talent of an outstanding personality in architecture who demonstrates attitude with creative thinking, holistic design approaches and inspiring social commitment. Previous winners include MVRDV, Bjarke Ingels Group, gmp Architekten, Dorte Mandrup, Snøhetta and Francis Kéré.

AW Architektur & Wohnen, based in Hamburg, is one of the leading magazines for architecture, design, living, garden design and travel in Germany. For more than 60 years, AW Architektur & Wohnen has been actively involved in cultural discourse, advocating the highest quality in architecture, interior design and product design and presenting international thought leaders from these fields. Every year since 1997, the editorial team has chosen internationally renowned designers as AW Designer of the Year, and since 2012 also the AW Architect of the Year prize.