Do You Really Want to Live Like Your Mother?

The talk will be held in German.
Please register for this event at: [email protected]

With a focus on trendsetting forms of housing, PPAG architects is one of the leading protagonists of contemporary architecture in Austria. Since 1995, the Vienna-based architecture studio founded by Anna Popelka and Georg Poduschka has been working to stimulate the further development of our society through innovative living environments. 'Do You Really Want to Live Like Your Mother?' presents a 1:1 model of their idea for an elastic space configuration within an apartment. The installation features plans, drawings, and films for structures planned and built by PPAG, including residential buildings and urban development projects in Vienna and Berlin. The exhibition gives visitors an insight into the well-considered solutions which meet the demands of the diverse ways of life.

If one asks housing developers about their ideas and goals, the same basic answer is repeated throughout Europe: one-room flats, two-room flats, three-room flats, four-room flats – only the proportions vary. Visionary ideas for cohabitation are not part of the equation. The apartment itself has largely been standardized in Europe since modern times, in terms of both the size and floor plan of the various types.

Is this what we want? Is there another way? What does the city look like? Do we want to be content with typologies established at the end of the 19th century?

'Do You Really Want to Live Like Your Mother?' shows an abstract 1:1 model of their idea for an elastic apartment. These 54 square meters don’t claim to solve the housing question, but pose one of many possibilities for a truly heterogeneous housing market.

Eight small rooms are arranged around a large living room. Three of these are occupied: kitchen, bathroom, storeroom. The other five can be used as an extension niche of the living space, as a separate room or combined as a larger room. An academic married couple lives in the same type of apartment as a family of five. If the son moves out, his room can be used as a work niche. An apartment is therefore no longer designed for a specific number of residents, but can be used efficiently to full or less-than-full capacity.

The plywood exhibition installation is unfinished on the outside like a stage backdrop, but inside it is completely equipped and able to be experienced as an apartment. In and around the housing model, plans, drawings, and films give insight into built and unbuilt projects by PPAG. These include Slim City in Vienna’s urban lakeside development Seestadt-Aspern; their contribution to the 'Urban Living – Strategies for the Future' workshop (Berlin-Neukölln); Enzi courtyard furniture for the Vienna Museum District; their winning and realised project for the Europan 6 competition; as well as urban planning concepts for Berlin-Tegel and Berlin-Marzahn. These projects prove the feasibility of building housing that is low-cost, high-quality, and sustainable.

About PPAG architects
PPAG was founded in 1995 by Anna Popelka and Georg Poduschka in Vienna. PPAG understands architecture as an independent cultural discipline, on par with literature and music, which has a direct, physical effect on its users and society. For over 20 years, PPAG has been designing and implementing innovative habitats: 'With the eternal goal that tomorrow will be (even) better than yesterday and today.'

Awards (selection): Numerous national and international awards, including two nominations for the Mies van der Rohe Award, Prize of the City of Vienna for Architecture, and the Adolf Loos State Prize for Design.

PPAG office founders Anna Popelka and Georg Poduschka met with Kaye Geipel and Christian Kühn for the Wohnzimmergespräch 'Willst du wirklich wohnen wie deine Mutter?' (in German). Among other things, they discussed the need for diversity in the housing market and related solutions for progress in architecture, housing and urban design. The conversation moderated by Maik Novotny took place in the exhibition. 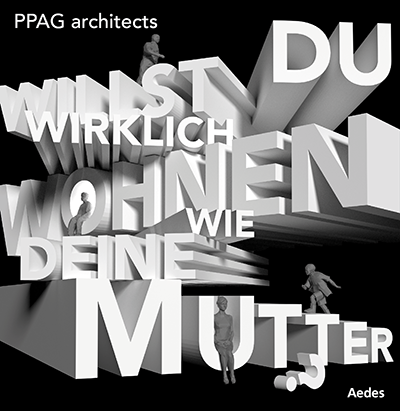