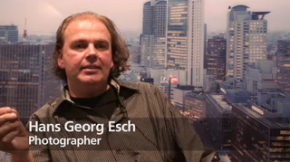 During the opening will be a concert with and by Christopher Dell. Duration about 10-15 minutes.
An exhibition in the framework of the 3. European Month of Photography, Berlin: www.mdf-berlin.de
For further information and illustrative material on the exhibition, please contact Beate Engelhorn: [email protected]

This exhibition entitled “City and Structure – Metropolises” puts on display Hans Georg Esch’s independently created urban photographs. The images vividly illustrate his fascination for the rapidly growing business metropolises that his voyages have taken him to. While the part of the exhibition entitled “City” shows breathtaking urban views, in the second part named “Structure” he infiltrates the city and reproduces exclusively the surfaces and façades of urban architecture.

Hans Georg Esch successfully portrays the phenomenon of the city through carefully selected perspectives. His modest and unobtrusive gaze enables viewers to experience the incredible dimensions of modern cities captured in his images. Most megacities are currently undergoing a process of architectural adaptation – a fact clearly demonstrated by Hans Georg Esch’s unique and exciting approach. The book entitled “City and Structure“ will be published at Hatje Cantz Verlag, editor Kristin Feireiss.

Hans Georg Esch was born in 1964 in Neuwied/Rhein, Germany. Qualified in classic photography he has been working as a freelance architecture photographer since 1989. Increasingly, commissions from renowned national und international architectural practices have taken him to Asia and the United Arab Emirates. The exhibition “City and Structure – Metropolises by H. G. Esch” for the first time puts on display his independent originated photographic series. Hans Georg Esch lives and works in the city of Blankenberg/ Hennef in Germany.