Urban Ergonomics. From Steel Plant to Olympia to Public Good 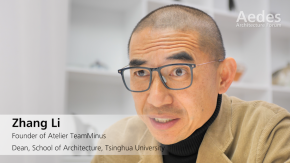 In February 2022, China will host the XXIV Winter Olympic Games. The various sports events will be held in three locations; Beijing, Yanqing and Zhangjiakou. In Beijing, the games largely take place in the existing sports facilities built for the Summer Olympics in 2008. The only new project is the Big Air Shougang slope for freestyle skiing and snowboarding in Shougang Industrial Park designed by Brian Li Zhang's design office TeamMinus at Tsinghua University in Beijing. Big Air Shougang is located at the once largest steel plants in the region. The Olympic Games will be used to sustainably transform the gigantic industrial relics for new uses. The exhibition focuses on the jumping track for the Big Air Shougang and encourages visitors to communicate ergonomically with the building through an interactive game. The office’s approach is presented in three other projects, where space for movement decisively shapes the architecture. The Jianamani Visitor Centre in Qinghai province, the underground cultural centre in the Piazza and Art Space Gujiaying Village in Yanqing and the Aranya Ideas Camp and Community Centre in Qinhuangdao. TeamMinus received the IUPA International Urban Project Award 2021, awarded by Bauwelt, Berlin and WA World Architecture, Beijing for the Big Air Shouguang transformation project with the facility for free-style skiing and snowboarding, while the Jianamani Visitor Centre received the Zumtobel Group Award - Innovations for Sustainability and Humanity in the Built Environment back in 2017.

The Transformation of the Shougang Industrial Park

Inspired by the depiction of the Buddhist Apsaras in Dunhuang – female figures comparable to the nymphs of Greek and Roman mythology – the architects designed the Big Air Shougang complex with elegant curves on the edge of Qunming Lake, formerly used for cooling water, next to the preserved cooling towers of the steel production. The depicted flying Apsaras with waving scarfs form an analogy to the elegant flights of the competing athletes. The industrial remains form a spectacular scenery together with newly designed open spaces, that connect a park landscape with a river close by. With this scenery in the background, the location will stay open to the public after the Olympic Games. Besides the new free standing ski jump, TeamMinus renovated the former Oxygen Factory, which will be used directly for the Games and later made available to start-ups along with other structures. The transformation of the formerly gigantic steel factory into a park landscape with jobs for a sustainable economy shows the ambitions associated with this project.

The exhibition focuses on the Big Air Shougang ski jump and playfully encourages visitors to recreate and optimise the optimal ergonomics of the athletes. At two launch sites, visitors can put themselves in the position of the athletes with the help of templates and practise the best posture for elegant turns and jumps. The playful approach to an architectural concept illustrates the training of the athletes. After all, the ski jump can only be used with the optimal body posture, so people have to communicate ergonomically with the building. This interactive element is supplemented by a composition of plans and illustrations on Big Air Shougang as well as three other projects by TeamMinus.

To illustrate the architectural approach of TeamMinus, the exhibition presents three other reference-projects where movement plays an important role. What all three buildings have in common with the Big Air Shougang facility for the Olympics is that a playful ‘space for movement’ decisively shapes the architecture.

The Jianamani Visitor Centre in Qinghai Province is a cultural centre for the local Tibetan population and visitors, providing access to the significant historical and religious sites of the local culture from the publicly accessible roof platform.

The underground cultural centre in the Piazza and Art Space Gujiaying Village in Yanqing (where parts of the Winter Olympics will also be held), was built in 2019 for the Beijing International Horticultural Exhibition. The roof is a ground-level public space whose corners are bent up to provide natural light to the cultural centre below. With a curved, suspended ramp, Zhang Li and his team lead users and visitors inside, echoing the movement of the curved roof surfaces.

The Aranya Ideas Camp and Community Centre in Qinhuangdao on the coast of Shandong province connects elongated ramps across the roof to interior spaces. Run by a private educational institution, it offers summer and winter courses where children learn new aspects of culture, their craft skills and social skills with close contact to nature.

Zhang Li is the initiator and main promoter of the new interdisciplinary field of 'urban ergonomics', which integrates architecture and ergonomics and pays attention to the positive interactive relationship between human body and space in order to gain high-quality urbanization. Besides their achievements for the Olympics, TeamMinus played an important role in the reconstruction after the Yushu earthquake, the Shanghai World Expo and other major national construction projects.