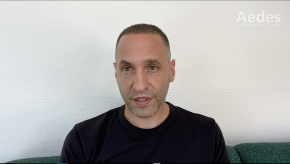 Omer Arbel is an artist, designer and architect based in Vancouver and co-founder of the lighting firm Bocci. Arbel experiments with architectural material and form, creating works that he rather numbers in the order of their creation, instead of giving them a title. The exhibition presents four architectural projects that are currently being built through a series of drawings, prototypes, videos, large-scale models and sculptural applications of different materials. Included in the show are five concrete sculptures distributed inside and outside of the Aedes spaces. These prototypes express the architect’s interest in the flowing nature of poured concrete and how it can be used. The exhibition provides an insight into Arbel’s practice to cultivate a fluid position between the fields of architecture, sculpture, invention and design.

Sculptures
The numbering of Omer Arbel’s design compositions and architecture projects does not follow a certain mathematical pattern, to number the projects is merely an idea that grows over time; once an idea takes on a form, it gets introduced with a number. Omer Arbel’s ongoing creative process includes incorporating many materials especially copper, glass and pouring concrete. In the last 15 years, Omer Arbel has been experimenting with various techniques of pouring concrete – an investigation that often resulted in cutting the material.  Omer Arbel - Architectural Experiments in Material and Form: 75, 86, 91, 94, brings to the fore Arbel’s ongoing dedication to push the boundaries of material whether in art, design or architecture. In the centre of the exhibition is a large-scale suspending lighting installation, made of blown glass named 28, which is a result of his experimentative approach and method. On display and arranged throughout the Aedes indoor and outside spaces, are five concrete “donut-shaped” sculptures, which are cut from fabric cast concrete forms the so-called Lily Pads. Thickness and layers reveal the scars and characteristics of the concrete material. Their unique shape and massive appearance demonstrate a small part of Arbel’s ongoing experimental practice.

Architectural Projects
The four architecture projects (75, 86, 91, 94), which are located outside of Vancouver are currently under construction and are to be seen in four architecture models, documentary films, drawings and prototypes.

75
The architectural model for a private residence that is currently being built in the periphery of Vancouver is composed of a series of concrete forms, the Lily Pads, as Omer Arbel calls them. Instead of pouring concrete into a wooden framework, a geotechnical fabric material is stretched between radially organised plywood ribs was used. The cavity in the middle is filled with a root of a mature tree.

91 and 94
Both architectural projects are set to interact and evolve within the rugged, remote, oceanfront Canadian landscapes in which they are build. The building 91 is a heavily sandblasted cedar bridge between two naturally occurring ridges, spanning over a sunken fern gully; it is anticipated that over the next 100 years, rising sea levels will flood the gully, giving the project an entirely different reading. The building 94 contrasts the character of underground spaces with the sudden discovery of being suspended over the edge of a cliff; numerous cedar offcuts are tumbled into amorphous forms and used first as formwork for concrete and then second as kinetic cladding.

About Omer Arbel
Based in Vancouver, Omer Arbel began his career as an apprentice to Catalan architect Enric Miralles before completing his professional degree in architecture in Canada and working with, among others, John and Patricia Patkau. Arbel established the design and manufacturing company Bocci on the outskirts of Vancouver in 2005 and is simultaneously working with his own practice cultivating a fluid position between the fields of architecture, sculpture, invention and design.