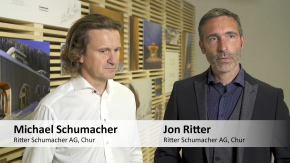 The architectural office of Ritter Schumacher is based in Chur, located in the eastern Swiss alpine canton of Graubünden. The traditionally close relationship between the city and the surrounding region has shaped the holistic, integrative working approach of Jon Ritter and Michael Schumacher.

The exhibition provides insight into their firm’s planning strategies for rural development in Switzerland. Using their work in the municipality of Churwalden as an example, it shows how a series of precise structural interventions in the rural context has set in motion a consistent, sustainable process of the area and is driving its future development.

Central to the work of the office is to activate the surrounding rural areas through targeted interventions, while working in close dialogue with the municipal administration and users to make the villages and communities more attractive – both for the local population and tourism.

The Swiss municipality of Churwalden lies along the pass road from Chur to Lenzerheide and depends on ski and hiking tourism. The linear village structure developed historically along the main traffic axis. The village is being revitalised in an impressive way through the addition of several functional buildings, where new summer recreational activities will complement the well established ski tourism. Carried out in successive steps, Ritter Schumacher’s projects have been specifically designed for this location and involve all local stakeholders, are leading to the formation of a new, striking town center. The architects’ contribution to development and planning goes well beyond their design expertise. They also act as planning consultants and project developers, initiators of participatory processes, catalysts, while acquiring users for the additional proposed functions in the area.

‘Portal Churwalden’ Gondola Lift/Restaurant
The first new element contributing to Churwalden’s development was the new valley station (2015). It includes a restaurant and viewing platform, while functioning as the entrance building to the Lenzerheide Arosa ski resort. The building’s strategic placement led to a reorganisation of the existing local structure. Its expressive design and skillful mix of functions create an unmistakable identity.

Pradafenz Campground
For the redesign of the campground, including the administration and service building (2016), Ritter Schumacher were inspired by the design language of camping trailers with their diverse interior fittings and rounded wheel arches. The building’s striking architecture houses a wide range of services for the campground in Churwalden – used by tourists and locals alike.

Churwalden Bus Terminal/Supermarket
The construction of new buildings in the village center, led to an increased demand for a better public transportation network. This resulted in the Bus Terminal (2017), which was built at the suggestion of the architects as a mixed-use structure, and also functions as a supermarket. This new urban component is located directly on the main thoroughfare and marks the access road to the valley station. The terminal’s contemporary construction using timber, a typical building material in the area, also fosters a sense of local identity.

This was followed by additional structures in the immediate vicinity: a dome-like roof of wooden shingles covers a marble run (2018) which was donated by tennis player Roger Federer, and a tower-like residential building (2018). While an ensemble of new apartment buildings complements the towns striking new center with the creation of a public square, to be completed in 2020.

Exhibition
In the elaborately designed exhibition installation, the urban development process and the projects in Churwalden are explained in detail. These are complemented by further buildings which illustrate the firm’s creative range. Ritter Schumacher received numerous awards for their commitment to the community of Churwalden, including the Award für Marketing + Architektur for the Portal Churwalden in 2016, as well as the Award für Marketing + Architektur  and an honorable mention by the Prix Lignum, both for the bus terminal in 2018.

About
Ritter Schumacher is one of the leading architectural firms in Graubünden with offices in Chur, Zurich, and Vaduz/Liechtenstein. The interdisciplinary team consists of architects, technical drawers, interior designers, project managers, site managers, and specialists in the fields of 3D visualisation, graphic design, administration, and marketing. In addition to a large number of office and residential buildings, the firm’s multifaceted oeuvre focuses on buildings for research, education, tourism, and infrastructure, as well as revitalisation projects, mainly in Switzerland and Liechtenstein. A project for a school for the arts in Liuzhou, China is currently under construction.