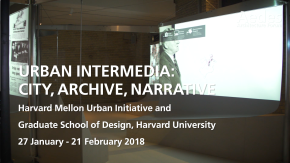 New research fields and methods in the area of the built environment are being developed due to the increasing dynamics and complexity of urban spaces. Different media can serve as tools for knowledge production, such as archival documents, digital records, photography, cartography, architectural drawing, graphic design, text, animation, film or video. The Harvard Mellon Urban Initiative, sponsored by Harvard University and the Andrew W. Mellon Foundation, is investigating interdisciplinary urban research through a broad use of media in a four-year study. ‘Urban Intermedia: City, Archive, Narrative’ presents projects by scholars and designers which provide innovative perspectives on urban environments, societies and cultures in Berlin, Boston, Istanbul and Mumbai through visual narratives.

Both the research and the exhibition focus on the importance of communication and collaboration across professional boundaries and academic disciplines when it comes to urban issues. Each discipline produces its own forms of knowledge but also has its ‘blind spots’ that can only be approached through other frameworks.

The Harvard Mellon Urban Initiative uses new media-rich research methods to bring those blind spots into focus and to explore topics and themes that are outside the conventional narratives and dominant conceptual frameworks of urban research. In particular, a range of technologies is used to bring physical and digital into dialogue and registration with each other.

By these methods, the distinct languages of different media interact at the deepest structural levels – hybridizing and exchanging properties and techniques – and in the process generating new ‘intermedia’ languages and ways of acquiring and producing knowledge about cities. These methods make it possible to examine complex and dynamic urban phenomena through multiple critical lenses, and to visualize them in densely layered spatiotemporal narratives.

The four city-based research projects in Berlin, Boston, Istanbul, and Mumbai serve as ‘portals’ into three key themes that structure the exhibition:

• the interdependence of the planned + the unplanned, formal and informal practices
• the urban imprint of migration + mobility, modalities of inclusion and exclusion
• the interrelation of nature + technology, urban ecologies and infrastructures

These themes are explored through site-based intermedia visual narratives – composed of digitized archival and contemporary photographs, drawings, maps, animations, documents, texts, video and film footage – that unfold in place and time. Projected onto silicone screens embedded with 3D models of the cities, the dynamic, immersive, and media-rich narratives challenge our encounter with and understanding of urban environments. The stories they tell are radically open to interpretation, elaboration, and the interactive construction of meaning with viewers of the exhibition.