UNLAKECITY - where there was a lake, now there is a city

Geography and Architecture in Mexico City

An exhibition as part of the Mexico Germany Alliance - Dual Year between Mexico and Germany.

“The situation in Mexico is more or less that of Venice. The only difference between them is that Venice is built on the sea and Mexico on a lake.” This is how Thomas Gage, a Dominican monk born in England in 1602 who arrived in 1625 to the New Spain, described Mexico City.

Today, Mexico is the most populous metropolis in America. At two thousand meters above the sea level, it is surrounded by mountains that overpass the three thousand meters of altitude. UNLAKECITY - where there was a lake, now there is a city, is an exhibition that focuses on the geography and the architecture of Mexico City, from the past to the present. Concentrating in two important key subjects - water and the construction of public space, the urban development will be explained visualizing the geographical condition of the city.

Curated by Miquel Adrià and Alejandro Hernández Gálvez, the exhibition's title UNLAKECITY alludes to the transformation that took place over the centuries in the valley of Mexico. The term makes reference to un lago, a lake and unlake, the process of disappearance of the lake through a constant "urban dehydration". The exhibition is divided in two sections: There was a lake and Now there is a city. The first section reflects on the meaning of water within the context of the city. The second section shows projects of public space, not only understood as squares or parks, but including cultural buildings and public institutions, such as museums, schools, markets and hospitals. Each thematic focus briefly describes the history, and shows some present conditions and takes a glance into future projects, with some utopian ideas but also that are already under construction. Besides maps, plans and photographs, the exhibition showcases a topographic model of the valley of Mexico that presents the current hydrological conditions, a video which shows the transformation of the city during the past five hundred years, and a series of interviews with Mexican architects, urbanists and intellectuals.

The exhibition was conceived in the Dual Year between Mexico and Germany.
The Dual Year was established by Chancellor Angela Merkel and President Enrique Peña Nieto to foster mutual understanding, deepen collaboration and endorse exchanges amid both societies that enable to jointly face the XXI century global challenges. The year comprises an ambitious cultural, academic and economic programme which will strengthen the friendship ties that exist between both countries.

We thank Zumtobel and Sto for the technical support.

An Aedes catalogue has been published.
German. € 10,-
Catalogue Order 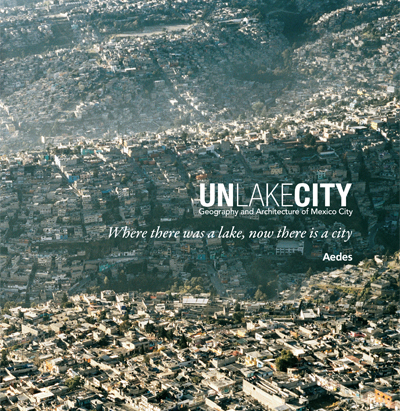