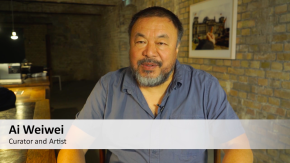 An exhibition in collaboration with neugerriemschneider, Berlin

Eid will talk about his work and give you an introduction to the exhibition and his work. He will be accompanied by Yehuda Shaul, from the NGO 'Breaking the Silence' who will give some insights into his work and the circumstances in the West Bank.

“We are all refugees somehow, somewhere and at sometime“ Ai Weiwei

Chinese dissident artist, political activist and Berliner-by-choice Ai Weiwei is well known for the frequently provocative and subversive dimension of his art and his political outspokenness. He often uses his multifaceted creative work – that ranges from sculptural installations, architectural projects, photographs, and videos – to comment on human right issues, which triggered various forms of repression from Chinese authorities.

For quite some time now, Ai Weiwei has also called attention to the current refugee crisis with millions of displaced people in search of safety and home. From his constant reporting from out front in the refugee camps of Greece, Turkey, Lebanon, Jordan, Israel, Palestine and Italy on social media, to the wrapping of the columns of Berlin’s Konzerthaus with salvaged refugee life vests in February of this year, to the “walk of compassion“ he organized with British-Indian artist Anish Kapoor in London last year, Ai Weiwei thereby aims at “defending the dignity of refugees.“

“I am naturally drawn to the state of existence of anyone who’s forced to leave home,“ Ai Weiwei explains in an interview with Hans-Jürgen Commerell of Aedes. Having been forced himself to live in exile with his father, Ai Qing, for most of his childhood in a remote and deserted region of China because of his father’s political conviction, and having moved to the United States in the early 1980s for more than a decade in order to escape the restrictions of Chinese society, Ai Weiwei explains that questions relating to refugees and resettlement are a “direct, continuous, undisrupted issue for me.”

For the exhibition Post Resettlement at Aedes Architecture Forum – where Ai Weiwei’s work was shown already in 2001 for the first time – he now acts as artist-curator and invites Palestinian artist Eid Hthaleen. The two met during Ai Weiwei’s recent travels through Israel and Palestine, and show in the exhibition a direct reflection of their experiences. As a self-taught artist from the Bedouin village of Umm Al Khair in the Southern Hebron Hills, Eid builds miniature-sized, toy-like models of jeeps, bulldozers and helicopters from plastic, iron, and other found material. Living under the constant threat of demolition and expulsion, the artist renders exactly these vehicles carrying out the destruction “back into constructive elements that can be appreciated again for their positive use” as he describes it. With the exhibition, Ai Weiwei, who creates the spatial setting for Eid’s work, once more raises awareness for yet another crisis of humanitarian rights.

For supporting this exhibition we thank: