After Hurricane Sandy - Rebuild by Design

Resilient Planning Through Collaborative Design
An exhibition and symposium commissioned by ANCB in collaboration with: The United States Secretary of Housing and Urban Development, Washington DC; Rebuild by Design, New York; Schindler, Ebikon; The Netherlands Embassy in Berlin; Zumtobel, Dornbirn. 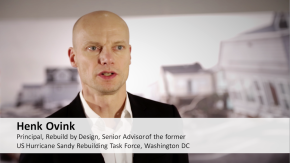 Background
Natural disasters and their devastating aftermath are increasingly becoming a reality for many communities around the world. The exhibition and accompanying symposium will focus on a new approach to disaster management and preparedness that results in stronger, more resilient communities through a process pioneered by the Rebuild by Design initiative.

In October 2012, millions of people across the Northeast Coast of the United States felt the force of Hurricane Sandy. The storm covered an area more than one thousand miles in diameter and became the second most expensive natural disaster in the country’s history. The storm’s damage exposed the true physical and social costs that communities suffer in the wake of natural disasters around the world.

Rather than simply reconstruct what had existed before the storm, or rely on conventional strategies of disaster management, the scale of the devastation led to an increasing awareness that a new approach to rebuilding had to be considered, one which would increase the resilience of affected communities in preparation for a changing world.

Rebuild by Design
As a response, in the spring of 2013 President Obama’s Hurricane Sandy Rebuilding Task Force, led by the United States Department of Housing and Urban Development (HUD), initiated Rebuild by Design—a competition that would promote resilience through innovative planning and design. Rebuild by Design led ten international, interdisciplinary teams, chosen from 148 who applied, through months of intensive research and collaboration with neighborhood stakeholders throughout the Sandy-affected region. The teams have worked together in a year-long process, learning how best to help communities redevelop for long term resiliency.

In June 2014, HUD Secretary Shaun Donovan announced six of the projects as winning proposals and allocated US $930M of Federal Disaster Recovery funds for local and State governments to implement the first stages of the designs.

Results
This exhibition shows the research that went into the competition and the final results from the winning teams, as well as other innovative solutions developed during the competition to improve local and regional resilience. Winning designs include:

Winning designs will be implemented using federal disaster recovery funds as well as other public and private sector funding. Additional designs in the exhibition include:

Rebuild by Design is an initiative of the Hurricane Sandy Rebuilding Task Force and HUD, in collaboration with primary partners at the Institute for Public Knowledge at New York University, Municipal Art Society of New York, Regional Plan Association, Van Alen Institute, as well as many other organizations. Rebuild by Design was funded through the philanthropic support of the Rockefeller Foundation together with the JPB Foundation, Deutsche Bank Americas Foundation, Hearst Foundation, Surdna Foundation and the New Jersey Recovery Fund.

ANCB programme
The exhibition and the Symposium are part of the ANCB programme Phoenix Reloaded: Rethinking Disaster Responses, Preparedness and Prevention, which seeks to draw out lessons that can be learned from past catastrophes and generate debate around ideas and approaches for ongoing disaster management and preparedness, proactively stimulating new visions for the
future. One of the most significant aspects of the Rebuild by Design process within Phoenix Reloaded is its emphasis on bringing together community members, government representatives, and spatial designers to work with and learn from each other in order to develop forward-thinking, considered proposals that benefit the affected areas and their residents.

To learn more about Rebuild by Design visit: http://www.rebuildbydesign.org.
See also the following articles by the New York Times, ArchDaily and the New Yorker:
http://www.nytimes.com/2014/04/13, http://www.archdaily.com,http://www.newyorker.com/magazine