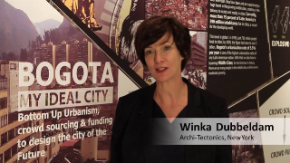 On the occasion of two Aedes exhibition openings we cordially invite you to the public debate at ANCB:

Bogotá - Caracas: Bottom-Up Urbanism to Design the City of the Future
and to the book launch:
São Paulo - Paraisopolis. Order and Progress?

The publication São Paulo - Paraisopolis. Order and Progress? follows up on the first iteration of the Re-act Lab programme at ANCB and presents essays and project proposals concerned with the design of the informal city. It will be presented by Elisabete França, former Director of Social Housing at the Municipality of São Paulo.

This exhibition introduces the research and bottom-up-scenarios developed by the office of Winka Dubbeldam, Archi-Tectonics, New York. They recognized that traditional planning in the fast growing Latin American countries collapse under political corruption and inconsistency. Top-down Urban planning is no longer a valid proposal here, so a bottom-up-scenario-based model is created instead. Rodrigo Nino of Prodigy Network, was the initiator and creator of this bottom-up approach. Sponsored by BD Promotores, he invited Archi-Tectonics to be the lead architect, to create not only a team of experts, but to fulfill these demands by using the newly generated knowledge in urban design strategies, participatory processes, and smart application of digital and virtual processes. Archi-Tectonics is cooperating with important innovators such as Gary Hack, an Urban Planner responsible for Manhattan’s WTC area and West Side development, PSFK, an English trend research group and crowd-sourcing expert to assist Rodrigo Nino in the creation of the crowd-sourcing platform, and the realtime dialogue with the people of Bogota.

Basis for the development of this initiative was the awareness of new circumstances. Latin America is experiencing a dramatic surge of its middle class. In just a decade, the proportion of people in Latin America with a daily per capita income between $10 and $50 a day went from around one-fifth to one-third. For the first time in history, there are as many people in the middle class as there are in moderate poverty. This destroys our romantic view on Latin America as a region of poverty, corruption and inequality, a region that needs Western support and care. The change from the third world developing countries into developed regions with higher levels of education, rising incomes, booming economies & trade, caused the massive growth of the middle class.

This new middle class now has a much better vehicle to help create their city and their wealth. The recent initiative by Rodrigo Nino of Prodigy Network is “My Ideal City”. This online-platform is an instrument where all people in Bogota help to create their city by interacting in proposals made for their Downtown in crowd-sourcing, thus impacting design through real time interaction and direct feedback. Once the different initiatives are defined, the process is completed by the population crowd-funding it's own initiatives. A first example for the success of this new model is BD Bacatá, a project developed by BD Promotores, where Prodigy Network has brought together more than 3500 investors, who have invested more than 200 million dollars, making it the largest skyscraper in Colombia's history and the world record in crowd-funding.

“My Ideal City” goals far exceed the city limits of Bogota, in fact the campaign aims to inspire a global discussion of the needs and wants of the next generation of urban dwellers and has recruited top thought-leaders of industry to help create and build this city of tomorrow, built by the people of today.

The exhibition shows research and proposals from the „Ideal City“ Bogota and will give an insight to these innovative strategies in urban planning that could serve as a new start in the development of urban planning processes in the Third World.