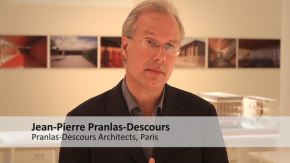 This combinations of words is not so much intended to refer to indentity-based contextualism, but rather to convey the idea that architecture, above all, is about buildings thoughts and representations, in which the situations reflect into questions each time, based on the knowledge acquired in History, Art and Politics in the broadest sense of the terms.

On both an architectural and territorial level, this reformulation and questioning can occur with mere changes in architectural vocabulary, or by creating new metropolitan landscapes.

Through fifteen projects, presented in the exhibition, the aim is to highlight how our eye is constantly subjected to contradictions – contradictions which fuel architecture, and reveal its essence, in order to come up with new meanings within contemporary territories.


The architectural models that form the mainstay of this exhibition are the most important tools in the design work of the Pranlas-Descours Studio. Providing an apercu of the structure before it is made material, these models show the Studio’s housing and public building projects in their settings and in their tectonic translations.
Although the exhibition’s title brings together the words Architecture and Situations, this association is less a reference to an identity-based contextualism than to the idea that architecture primarily builds reflections and representations in which settings are cultural, political and social “environments”. In each case, these environments must be reformulated and reconsidered in the light of History, Art and Politics, in the widest senses of the terms.

Jean-Pierre Pranlas-Descours qualified as an architect 1982 at the École d’Architecture, Versailles and got a graduate degree in history from the École des Hautes Études en Sciences Sociales in 1984. He received an ‘Albums de la Jeune Architecture’ award in 1984 and subsequently won the French Academy in Rome competition, spending a year at Villa Medicis in 1986/87 and started up his practice as architect and urban planner in 1988.
In 1989 he was selected as the laureate of the International Competition for the extension of the Diagonal of Barcelona.
Form 2006 ongoing Jean-Pierre Pranlas-Descours is Professor at the Ecole d'Architecture de Paris- Malaquais.
In 2010 he was awared with the Price for the Urban Design, for the Rives de la Haute Deûle, District - Lille – le Moniteur review and with the Robert Auzelle Price in 2011 for the Bottière-Chenaie urban project in Nantes.

The exhibition ‘Architecture, Situations’ was already presented in 2011 at La galerie d´architecture, Paris and the book PRANLAS-DESCOURS, Architecture-Situations by Kenneth Frampton, éd. Ante Prima was launched at the same time.

The exhibition has received generous support from the Aedes Cooperation Partners Zumtobel, Busch-Jaeger, carpet concept, and Axor hansgroh and Ervefel.