A history of nature as a model for developing forms
in civil engineering, architecture, and the fine arts 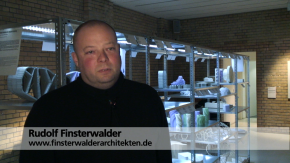 “The aesthetic element cannot be planned directly. An aesthetic form arises at the end of a process. One cannot reach it by striving for beauty alone. When we have worked honestly, sometimes it comes about by itself – as a gift.”

Frei Otto in conversation with Rudolf Finsterwalder on 28 Oct 2008


Since time immemorial, people have been preoccupied with nature as a model, as a goal, and as a challenge – simply by virtue of its sheer perfection. In many respects, nature represents a fund for creative individuals, and at the same time a counterpoint to one's own activities. Such forms – which are optimal in terms of energy use and construction, but also in terms of adaptability and versatility – can serve as exemplary. Creating from the rich fund of nature, learning from it, and drawing inspiration from it, are natural scientists, engineers, architects, artists, and musicians. The formal variety of nature is infinite. Based on a limited number of mathematical laws is a seemingly endless multiplicity of forms and patterns.

This exhibition and the publication which shares its title (Springer Verlag) provide an outline of the history of human fascination with nature, and offer perspectives for potential future knowledge in this area. Representatives of various disciplines show their works, all based on the study of the forms and structures of the natural world. The exhibition design is based on the principles of research in the natural sciences. Presented will be selected works – in the form of models and images, music and projections – by Frei Otto, Carsten Nicolai, Dieter Dolezel, and Finsterwalder Architekten. Models and sculptures will be presented in the archive on a set of steel shelves. Plans, images, and texts will be presented on cards in filing boxes. The display itself, then, represents an invitation to engage in intensive study and research.

Both exhibition and book were initiated and realized the architectural office of Finsterwalder Architekten, by Maria and Rudolf Finsterwalder. They have developed their ideas and projects independently of commissions, and have realized these in their built projects. Their architectural and supporting structures are generated through experimental processes, by means of an almost scientific approach. A preoccupation with the forms and structures of the natural world stands at the center of their interests. Their objective is to develop architectural forms which are organic and holistic.