Neri&Hu Design and Research Office, Shanghai
with studios in London, Paris and Milan 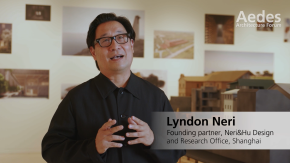 With Neri&Hu Design and Research Office, the Chinese avantgarde in architecture, research and teaching, product and interior design has arrived in Europe. In the exhibition Reflective Nostalgia, Lyndon Neri and Rossana Hu are convincing in the way they examine the historical and the contemporary as well as the listed and the everyday and to transform them into new uses in a respectful and future-oriented manner. In addition to their numerous conversions and new buildings in Asia, such as residential and office buildings, theatres, shops or, for example, a chapel and a whisky distillery, the exhibition also shows projects from Europe, including a restaurant in Paris, a hotel in London and the expansion of the creative quarter Cologne-Ehrenfeld with an office building. Neri&Hu also design products and showrooms for international companies, thus demonstrating their diverse skills and the quality of their work in all scales and disciplines. With design confidence, they create exciting, sometimes surprising spatial constellations – from found and recycled materials or building parts of the respective location and by adding new elements. Historicising set pieces are omitted, while the charm and character of the 'old' remains legible and tangible and thus identity-forming in Neri&Hu's positive reinterpretation of the nostalgic. Their transdisciplinary design approach is in the DNA of the studio. As early as 2004, they were co-founders of Design Republic, a multidisciplinary design platform in Shanghai. The success of the broad spectrum of their work is reflected in numerous international awards. They currently teach at the Yale School of Architecture and the Harvard Graduate School of Design. Rossana Hu was also appointed Chair of the Department of Architecture at Tongji University in Shanghai in 2021. The exhibition installation features architectural models, photographs and videos, as well as a selection of furniture. Neri&Hu's alternative reading of historical contexts, including all the contradictions and details, as well as the unexpected spatial compositions with which they respond to them in a magnificent way, can be experienced.

After more than two decades in which the Aedes Architecture Forum in Berlin has dedicated itself with great continuity to Chinese architectural culture, it can now be observed that an extremely exciting spectrum of architecture and design studios has developed since then that belong to today's Chinese avantgarde. Neri&Hu are outstanding representatives of this group, who have developed their own specific approaches and have been able to position themselves with multifaceted projects in the context of resource-saving construction and sustainable transformation of architecture and urban spaces.

The discussion about how to deal with buildings and neighbourhoods of past times is shaped by different interests in terms of building culture, society, ecology and especially economics. In times of increasing sustainable planning and building worldwide, however, the congenial couple set new standards early on, especially in China. A growing awareness of the values of past Chinese building culture and craft techniques as well as the realisation that resources are finite led to a rethinking process in which Neri&Hu played their part. Lyndon Neri and Rossana Hu demonstrate their conviction to intensively study and reflect on the historical and the contemporary, including the everyday, and to enable new uses for it in a respectful yet future-oriented manner, both practically in their buildings, interiors, product and graphic design as well as in research and teaching.

With their approach, Neri&Hu respond to a global and above all Asian trend in urban development and urban design: the disappearance of perceptible differences and characteristics of places and cities. They work

"... apart from the polarised development between technological progress and kitschy historicism, which globally but especially in the Asian region blur the differences between cities that are otherwise culturally unique and highly diverse, giving rise to vast landscapes of anonymous, characterless cities." Neri&Hu

Neri&Hu use Reflective Nostalgia as a method, a productive lens through which they have discovered an alternative reading of historical contexts as well as a new design process within that context. They take away the negative meaning of nostalgia and see it as a value. Inspired by the Russian-American scientist Svetlana Boym, Neri&Hu show that nostalgia has the potential to be constructive and not just reductive.

The studio's projects are expressions of the fascination of Reflective Nostalgia and are characterised by similar strategies such as the use of material contrasts, structural diversity and combinations of forms. However, each project has its own unique themes, for example in relation to dealing with the heritage from the French concession period in Shanghai (1849 to 1946), resistance to the commercialisation of false historical relics, or the role of representation in the polarity between past and present. In the works presented, one can sense the delicate balance between the contrasts of new and old, smooth and textured, refined and raw. Neri&Hu take up the challenge of Reflective Nostalgia by dealing with concepts and themes such as context, the role of the monument and the duality of destruction and development.

As diverse as Reflective Nostalgia appears in their projects, Neri&Hu also take diverse paths in their communication. Inspired by the warehouse or archive and the historical idea of the forum, the exhibition offers visitors various ways of approaching and understanding the concept of Reflective Nostalgia. The exhibition will feature around 30 projects, both completed and in the planning stage, from the fields of architecture, interior design, product design and graphics. Videos, numerous architectural models of various scales, photographs and a collection of chairs narrate the new and existing development projects and their connection with Reflective Nostalgia as a philosophy and method.


The Camerich Haus in Beijing, which Neri&Hu are currently planning, is also part of the exhibition. The Chinese furniture manufacturer Camerich has been an Aedes Cooperation Partner since 2019.

About Neri&Hu Design and Reseach Office

Founded in 2004 by partners Lyndon Neri and Rossana Hu, Neri&Hu Design and Research Office is an inter-disciplinary architectural design practice based in Shanghai with studios in London, Paris and Milan. The practice’s burgeoning global portfolio includes commissions ranging from master planning and architecture, to interior design, installation, furniture, product, branding and graphic works. The diversity of the team reinforces a core vision for the practice: to respond to a global worldview incorporating overlapping design disciplines for a new paradigm in architecture. Furthermore, Neri&Hu has expanded the conventional boundaries of practice to include complementary disciplines. A critical probing into the specificities of program, site, function, and history is essential to the creation of rigorous work. Based on research, Neri&Hu anchors its ethos on the dynamic interaction of experience, detail, material, form, and light rather than conforming to a formulaic style.

An Aedes catalogue will be published.
English, 10€