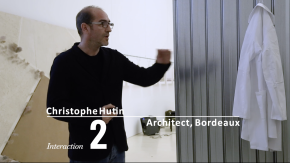 Conceptual Research on Architecture and Music
curated by Christopher Dell

Exhibition
The event will take place within the current Aedes exhibitions OUR URBAN LIVING ROOM. Cobe.Copenhagen and Architecture for Pigs - Stall.Slaughterhouse.Shop.

The lecture will be held in English.

Entrance is free, but seats are limited to partake please register [email protected]

#2 Interaction
Interaction can be defined as a situation in which two or more humans or objects act in relation to each other. If "each habitat creates new patterns of individuality [...] by their interaction in the close medium of the city" (Lewis Mumford), how can we regard such an interaction of humans and objects as city? And how can we show this process? Can its complexity be tracked? Can we deal with its complexity constructively? Furthermore, what does it mean that the agency of an interaction also frames, structures, or localises humans and objects?

Designed as a montage of lectures, concerts and discussions Dialogue Concerts is a series of events that will examine the interplay of urban space and communal life. Set up as an experimental interdisciplinary format, the Dialogue Concerts series is comprised of 6 events from December 2019 through December 2020. In this context,  the city is not defined as a fixed object, but as a dynamic and collective constellation that is performatively produced.

Curated by the vibraphonist, composer and urban theoretician Christopher Dell, Dialogue Concerts is presented as artistic statement and critical dispositif. International architects and musicians are invited to address aspects of procedural strategies across disciplines in a series of six Dialogue Concerts. Taking questions of mediality, corporality, interaction, materiality, structure and transformation as starting points, Dialogue Concerts creates a discursive space seeking to illustrate the societal relevance of both disciplines in a new way.

Dialogue Concerts is organized by Christopher Dell in cooperation with the Aedes Architecture Forum, funded by the Senate Department for Culture and Europe and the Musikfonds e.V. with project funds from the Federal Government Commissioner for Culture and the Media.