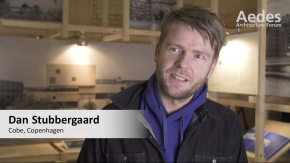 Opening Hours
Due to circumstances revolving around the COVID-19 virus, Aedes Architecture Forum will be closed to visitors until further notice.

Admission is free. Please register for the lecture at [email protected]

The Danish firm Cobe is currently one of the most renowned protagonists of a new generation of architects. Using innovative methods, the team led by Dan Stubbergaard explores diverse potentials of the urban and promotes them through remarkable projects. Cobe sees the city as an extended living room, in which private and public spaces can be connected in experimental ways – making liveability a central theme of their work. The exhibition Our Urban Living Room presents a selection of realized projects in Copenhagen from the past thirteen years, including the urban space Karen Blixens Plads, the residential highrise The Silo and the Frederiksvej Kindergarten. Using models, images, texts, drawings and films, the expansive wooden installation also tells a story about Copenhagen's architectural development and how these changes affect the everyday lives of people and their social interactions.

Over the past 30 years, Copenhagen has undergone major changes – from a post-industrial city to a liveable city, establishing itself as an experimental metropolis for sustainable urban development and pioneering architecture.

‘Our city is our home, and that quality is what underpins the success of Copenhagen today. The more we care for it – as architects, but more importantly as Copenhageners ourselves – the better we will treat it. The better it is designed, the more people will want to live well in our city and take pride in it. This is not a matter of beauty, elegance or wealth, but a story of social liveability and urban democracy,’ says Dan Stubbergaard, architect and founder of Cobe.

Our Urban Living Room is dedicated to the architectural practice of Cobe. Designed both as an architectural intervention and an exhibition, it invites visitors to step into an expansive wooden bookcase – visitors are able to browse through built projects by means of models, images, texts and drawings.

The bookcase forms the setting for showcasing seven themes. These include, among others, the transformation of industrial buildings, architecture for children and what Copenhagen could look like in the future. By creating an exhibition that invites play and interaction, visitors partake in defining the urban living room – learning from Copenhagen, right here at Aedes in Berlin.

Together with the Danish Architecture Centre (DAC), Our Urban Living Room was first exhibited in Copenhagen in 2016, and later at the urban information centre Laituri, in Helsinki in 2018. The current edition of the exhibition in Berlin was developed by Cobe in cooperation with Aedes Architecture Forum.

About Cobe
Cobe was founded in 2006 by architect Dan Stubbergaard. Based in Copenhagen, Denmark, Cobe has played a formative role in the transformation of the Danish capital into a vibrant democratic city designed for living, and is currently involved in a large number of projects throughout Europe and North America. Among the firm’s most distinctive projects are Nørreport Station – Copenhagen’s busiest station; The Silo and the planning of Copenhagen’s Nordhavn (North Harbour) district – Scandinavia’s biggest urban development to date; Ragnarock – Denmark’s museum for rock music in Roskilde; and the development of Paper Island in Copenhagen.

Cobe in Germany
From having a large number of projects in Copenhagen, Cobe has in recent years also done many projects abroad – especially in Germany. These include, among others, adidas HALFTIME – a combined meeting place and conference center for adidas’ employees, visitors, and brand ambassadors that opened at adidas’ headquarters in Herzogenaurauch in 2018, the transformation of Cologne’s former industrial harbor, Deutzer Hafen, into a new city district, and the mixed-use Europahafenkopf development in Bremen’s former industrial harbor, currently under construction.

Nørreport Station is the busiest train station in Denmark, with more than 250,000 people passing through it daily. Since the 1960s, the bustling station developed into a vast and chaotic intersection in the middle of the city. The new station is composed of a series of rounded, floating roofs, mounted on distinctive glass pavilions. A study of pedestrians’ preferred routes formed the basis of the station’s new design, providing an open and welcoming public space with specific consideration for the needs of cyclists and pedestrians. Nørreport Station is not only a station but also an urban landscape for people. It transforms Copenhagen’s busiest space into a single unified flow and becomes an integrated part of the pulsating city around it.

The Krøyers Plads site has been an architectural and political battlefield for more than a decade. Over the years, local organizations and politicians have rejected five architectural proposals for various reasons, until Cobe’s and Vilhelm Lauritzen Architects' final building design for this beautiful historical site on the Christianshavn harbour front was approved. The design is based on a hyper-democratic and contextual approach – an architectural storytelling approach that strives to create a meaningful and comprehensive infill through dialogue with the local community. Rather than inventing a new building type, Krøyers Plads is a reinvention of the industrial warehouse adjacent to the site. The new Krøyers Plads thus consists of three residential warehouses that fit into the existing environment, based on insights gathered from locals living in the neighbourhood.

In Copenhagen’s multicultural Northwest district, the social hub is a library designed as a diverse and unifying space – a place where visitors can read, play with their children, meet new friends or simply relax. The building is an extension of an existing cultural centre, with a library and concert hall that together form a community centre. The design is inspired by a stack of books. Each “book” contains a different aspect of the building, a structure that is meant to appeal to a diversity of people. In the void between the “books” and the old cultural centre, this space transforms the library corridors into a welcoming informal meeting place inside the building. It functions as a social hangout for visitors and residents in the Northwest district.

At its core, a kindergarten is about creating a safe, playful and inspiring setting for kids to grow up in. The starting point for this kindergarten was to create a building from the eye level of a child. The design is based on a concept that kids are very fond of: The playhouse. As a series of small houses within a bigger house, the interior of the kindergarten is composed of several small and different worlds that vary in size and function. A house within a house becomes a recurring motif, both indoors and out. The aim is to create architecture that is comprehensible in the eyes of a child and to draw inspiration from the simplicity and purity of a child’s drawing. The result is a scaled-down environment consisting of many different worlds, but also a place where kids can feel a sense of belonging to one specific house within the cluster of houses.

The 17-storey former grain silo is a natural point of orientation in Copenhagen’s new neigbourhood Nordhavn. The spatial variation within the original silo is immense due to the various functions of storing and handling grain, creating space for 39 unique apartments. Single and multi-level apartments range from 73 m² to 305 m² in size with floor heights of up to seven meters. Both the top and lower levels have public access, to ensure a multi-dimensional experience for the various users of the building. The Silo is inhabited, but also a destination. An urban focal point for the redeveloped Nordhavn area.

Future environmental challenges must be solved through a sustainable approach to city planning. The transformation of Nordhavn (North Harbour) – the largest metropolitan development in northern Europe – continues Copenhagen’s historic strategy of a step-by-step expansion into the surrounding sea. The new Nordhavn is conceived as an urban archipelago or a series of dense neighbourhoods on the water. Planning one island at a time, the Nordhavn master plan is not an ideal city vision, specifying every last detail, but rather a robust and flexible guideline intended to inspire future generations of urban planners. It is a way of addressing one of the great challenges of city planning: Designing for the needs and demands of today while trying to predict and address the major environmental challenges shaping our future. As the first DGNB platinum-certified urban area in Denmark, the Nordhavn project takes a holistic approach to urban planning.