A Journey to the Architecture of Kashef Chowdhury / URBANA, Bangladesh 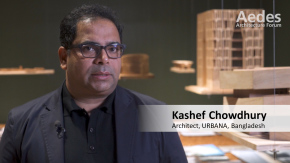 With this first comprehensive European exhibition the Aedes Architecture Forum presents the work of Kashef Chowdhury/URBANA from Bangladesh, who received the prestigious Aga Khan Award for Architecture in 2016 for the Friendship Centre on the flood plains of Gaibandha in northern Bangladesh. With further projects such as the Gulshan Society Mosque in Dhaka and the Cyclone Shelter in Kuakata, he gained widespread international acclaim. Careful arrangement of structures in areas marked by extreme climatic conditions, combined with local building techniques and materials, Kashef Chowdhury’s buildings are exemplary of an architecture that serves society with radical simplicity and poetry. With an atmospheric installation, the exhibition curated by Niklaus Graber and Andreas Ruby, invites visitors on a journey to Bangladesh and the architectural worlds of URBANA.

Bangladesh, which has been stigmatized in many respects as a peripheral region, has hardly been present on the global architectural map. However, this is likely to change in the near future. One reason for this is the architecture of Kashef Chowdhury/URBANA.

At first glance, Kashef Chowdhury’s buildings – such as his stormproof school or island-shaped village near the Bramaputra River – seem to have emerged directly from the local context of Bangladesh, which is one of the most densely populated regions on earth and dominated by extreme tropical climate conditions. At second glance, his architecture spans space and time from east to west, from the past to the present, and has universal appeal thanks to its masterful treatment of light, space and materiality. URBANA’s works are not only spatially and architecturally extraordinary in their immediacy; they also bear witness to the high social relevance of an architecture that thoughtfully and inventively addresses urgent issues such as population density, climate change, migration, and the reactivation of rural potential. Through local action, carefully developed from the history and geography of the world’s largest delta region, URBANA’s work acquires a global significance that moves us closer many themes, which where once thought to be faraway.

It is precisely because Bangladesh’s urban centers, such as Dhaka or Chittagong, are rapidly expanding under the pressures of rural exodus, that Kashef Chowdhury’s works are not only for the growing urban middle or upper classes. One of the architect’s main priorities is finding new strategies that offer the rural population, which still accounts for 75% of Bangladesh’s 165 million inhabitants, a sense of security and identity in their traditional habitat. The architect, who has designed training centers, hospitals, and settlements in remote areas, is keenly aware that only serious improvement of rural living conditions can halt the seemingly unstoppable flow of rural emmigration, and with it, the collapse of urban regions.

Bangladesh’s river delta landscape is an area prone to flooding, cyclones, and rising sea levels, where not only hydrologically, everything seems to be in flux. In this context URBANA’s buildings reveal an unexpected and uncompromising permanence based on clear geometries, local materials, and vernacular building methods. These are often variations on the bungalow typology, a form that has been tried and tested in tropical climates, made with bricks produced locally from the loamy soil, which serve as the basic modules of a predominantly handcrafted architecture. The carefully proportioned, atmospherically illuminated rooms succeed in balancing maximum functionality and robustness with sensuality and grace. Architecture thus becomes an important basis for providing contemporary and dignified living spaces to a segment of the population living on the fringes of society.

Kashef Chowdhury’s work with earth as a material always entails a dialogue with the landscape as well as the omnipresent element water of the delta, that is a blessing and curse alike. For the Friendship Centre in Gaibandha as well as the elevated settlements in the erosion-prone areas of the Bramaputra River, for example, plinths and embankments not only enable the buildings to stand out in their surroundings, but also protect them from the threat of flooding. Monsoon rainwater is collected in large basins and used for natural cooling or agriculture.

A new project demonstrating Kashef Chowdhury’s skill in tapping the potential of relevant architecture is his bamboo school in the Rohingya refugee camp of Ukhia along the border to Myanmar. Here, too, despite a minimal budget and the most precarious circumstances, the architecture draws out the sensual richness of space, giving the small school building an unmistakable identity in the midst of desolate emergency shelters.

The extent to which pragmatism and poetry can go hand in hand, and the strong symbolism they can bring forth, can also be seen in another school building. Located along the southern coast of Bangladesh, a region repeatedly hit by cyclones, a new primary school doubles as a protective structure during the annual storm season. As if the architects wanted to beat the storm with its own weapons, the classrooms are enclosed by a spiral-shaped access ramp. Its polygonal form reduces the impact of strong winds while protecting the interior spaces from swirling debris. Under Bangladeshs normal weather conditions, it serves as a shade, protecting the naturally ventilated classrooms from excessive sunlight.

A multilayered spatial experience and a high degree of permeability, which provide for balanced light conditions and natural ventilation, can also be found in URBANA’s projects addressing extreme urban density in the metropolis of Dhaka with its population of 18 million. The seven-floor Gulshan Mosque and the project for the Abahani sports complex are both based on a concept of vertical stacking and parallel use to gain surrounding open spaces. Thanks to the soft, almost fabric-like effect of the statically sound concrete shells, which protect against glaring sunlight like draped cloths, these urban interpretations of pavilion architecture become communicative actors in the urban space, despite their radicality and scale.

The exhibition: a tropical ‘Wunderkammer’

The comprehensive exhibition on URBANA’s work documents more than a dozen buildings and projects by means of models, photographs, film footage, and plans, and provides a kaleidoscopic view of the studio’s design and construction processes. Featured projects include the Friendship Centre in Gaibandha, a settlement in the erosion zone of the Bramaputra River, the seven-floor Gulshan Mosque, a cyclone shelter on the Bay of Bengal coast, and the school in the Rohingya refugee camp of Ukhia along the border to Myanmar. Furthermore, the URBANA team will open its studio to the public, providing an opportunity to explore a ‘Wunderkammer’ in a contemplative 1:1 situation. Visitors are invited to take a break from wintery Berlin and immerse themselves in a sensually choreographed journey through the rich cultural region and vast expanse of the Ganges delta, shimmering in tropical light.