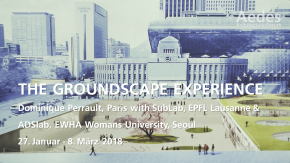 With this exhibition Dominique Perrault underlines his conviction for the potential of a better use of our cities underground. Nowadays, subsurface constructions are a particular form of architecture, a technical and logistics realm, which is buried to avoid seeing it. The SubLab (Laboratory for Underground Architecture) under Dominique Perrault' s direction, aims to correct this low exploitation and the rather unflattering terminology associated with it. As environmental challenges and urban problematic issues are forcing architects to extend their research area, the idea is to find new ways to occupy the territory - into the depths.

The second section presents the newly won competition entry of Dominique Perrault Architecture in partnership with Junglim Consortium from Korea called ‘Lightwalk’. It is a definite underground urban project that will form a new zone within the city of Seoul, in dialogue with the Han River and Tancheon stream. The program with a build area of 167.000 m2 includes a multi-modal hub, train station, urban park, and commercial complex, requiring a large-scale intervention in the city. The completion is scheduled for 2023.

The proposals of Dominique Perrault´s ‘SubLab’ and the students’ research demonstrate that ‘Groundscape’ can be a potent catalyst for urban networks. It also offers naturally ideal thermal inertia and ensures utmost respect for the landscape as a whole, providing elegant enhancements to the architectural heritage. So this final terrestrial frontier is economically within reach, with its vast, virtually untapped reserve of real estate. For developers, the ‘Groundscape’ opens up the possibility of expanding a building while respecting its context. For municipal authorities, it promises to provide a major source of revenue thanks to newly available development sites in central locations. The resources unlocked from this underground zone will enable cities to intensify urban life without increasing density.

Dominique Perrault
Praemium Imperiale award winner (Japan), the French architect and urban planner, Dominique Perrault, is a professor and director of the Underground Architecture Laboratory (SUB) at the École polytechnique fédérale de Lausanne in Switzerland. He is also the founder of DPAx, a multidisciplinary research platform exploring architecture from a wider perspective, and DPA Lab, a laboratory of research and innovation developing processes that reinvent the vocabulary of architecture.

Along with the Bibliothèque Nationale de France, his main projects to date include the Olympic Velodrome and Swimming Pool in Berlin, the extension of the Court of Justice of the European Union in Luxembourg, the Olympic Tennis Stadium in Madrid, the EWHA Womans University in Seoul and the Fukoku Tower in Osaka. In recent years, Dominique Perrault inaugurated the tallest tower of Austria in Vienna, the DC Tower 1, and led various heritage rehabilitation projects, including the new public entry pavilion for the Château de Versailles and the repurposing of La Poste du Louvre in Paris.

Current studies and urban research projects include the Olympic Village – Paris 2024 and the “Mission Île de la Cité,” an urban study commissioned by the president of the French Republic that reflects upon the future of the thriving, historical center of Paris from now until 2040. More info: www.d-p-a.fr and www.dpa-x.com

EPFL SubLab, École Polytechnique Fédérale de Lausanne, Switzerland
EPFL (École Polytechnique Fédérale de Lausanne), one of the world’s most cosmopolitan universities, is located on the shores of the Geneva Lake, at the foot of the Alps. Its main campus brings together over 11,000 people from over 120 nations. As part of the ENAC (School of Architecture, Civil and Environmental Engineering), the SubLab, (Laboratory for Underground Architecture) founded by Prof. Dominique Perrault, rallies Juan Fernández-Andrino, Ignacio Ferrer, and Richard Nguyen, a team of professionals, teachers, and researchers with specific architectural, technical, and academic experience in underground architecture. More info at: http://sub.epfl.ch

EWHA ADSlab, EWHA Womans University, Seoul, South Korea
EWHA comprises 14 colleges, 14 graduate schools, and 25,000 students, and each year has produced 3,500 graduates with bachelor’s degrees, 2,000 with master’s degrees and 200 with doctoral degrees. As Korea’s first educational institution for women, EWHA has now grown into the largest women’s university in the world.
Professor Yoonhie Lee is director of ADSlab (Architectonic Design Strategy Laboratory) at ELTEC College of Engineering, EWHA. Establishing research foundation in ADSlab, she seeks to work on the projects engaging her theoretical research and topics such as materials, details, and tectonic application. More info at: http://.ea.ewha.ac.kr and http://adslabplus.com