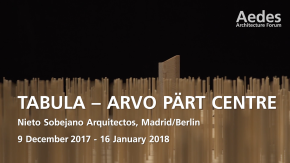 The exhibition TABULA presents the Arvo Pärt Centre created by Nieto Sobejano Arquitectos in Estonia. The new home for the centre is currently under construction and will house the legacy of the Estonian composer Arvo Pärt. The building complex is situated in Laulasmaa, 35 km from Tallinn, on a peninsula with a magnificent natural surrounding within a pine forest near the sea. The core of the Arvo Pärt Centre will be the archive, which brings together the entire creative heritage of the composer, providing a research and learning environment for cultural education. The exhibition presents a visual-acoustic installation which captures the atmosphere of the Arvo Pärt Centre, while visitors can listen to Arvo Pärts composition ‘Tabula rasa’.

The Estonian Arvo Pärt is regarded as one of the most important living composers of new music. With the aim of creating opportunities for preserving and researching the creative heritage of the composer in his native land, and in the context of the Estonian language, Arvo Pärt and his family founded the Arvo Pärt Centre 2010 in Laulasmaa.

With the chosen structure of a geometric pattern, originated in a repeated pentagonal form, the architects want to keep alive and interpret in architectural terms the creative legacy of Arvo Pärt means to find a balance between the intimacy of his musical compositions and the powerful beauty of the Estonian landscape. The Arvo Pärt Centre is planned to be opened to the public in autumn 2018, the year that Estonia celebrates its 100th anniversary.

The exhibition presents the new building for the Arvo Pärt Centre that is designed by the Spanish architects Fuensanta Nieto and Enrique Sobejano / Nieto Sobejano Arquitectos. The Centre covers an area of 2350 m2 and will accommodate the archive, a library, a 150-seat chamber hall, an exhibition area, a video hall, and classrooms for cultural education as well as employee’s work spaces.

The exhibition installation will convey the atmosphere of the Arvo Pärt Centre. The defining elements of the building will be displayed resting on a figurative plane in which shape, rhythm and transparency will become distinct parts of the conceptual presentation, in order to give an in-depth view of the project. Arvo Pärt ´s music will surround the visitors as they walk among the exhibited pieces.

Enrique Sobejano has worked as an architect since graduating from the Universidad Politécnica de Madrid and the Graduate School of Architecture and Planning at Columbia University in New York in 1983. He is a professor at the Universität der Künste Berlin (UdK), where he holds the chair of Principles of Design. He is a permanent member of the Akademie der Künste Berlin (AdK).

Fuensanta Nieto has worked as an architect since graduating from the Universidad Politécnica
de Madrid and the Graduate School of Architecture and Planning at Columbia University in New York in 1983. She is a founding partner of Nieto Sobejano Arquitectos and a professor at the Universidad Europea de Madrid.

They are recipients of the 2007 National Prize for Conservation and Restoration of Cultural Heritage and the 2010 Nike Prize issued by the Bund Deutscher Architekten (BDA), as well as the Aga Khan Award for Architecture (2010), the Piranesi Prix de Rome (2011), the European Museum of the Year Award (2012), the Hannes Meyer Prize (2012), AIA Honorary Fellowship (2015) and the Alvar Aalto Medal in 2015. 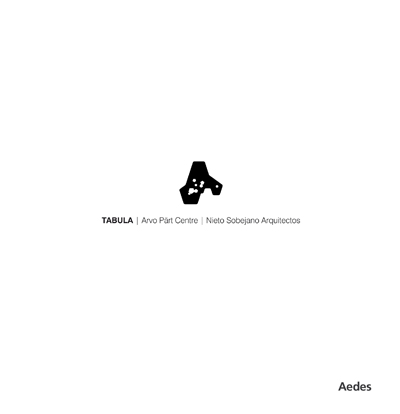