With a focus on social reality and a respect for local context and vernacular craftsmanship, Liu Jiakun's work shows a rare attempt to translate and transfer traditional Chinese cultural ethos into contemporary architectural language, and represents a fine quality of intertexture between individual and collective memories. Many of these projects throw light on the reciprocal relation between Chinese people's public life and urban cultural space. Aedes exclusively presents mainly local projects in Chengdu including West Village Yard. The exhibition unfolds urban evolutionary history and the genius loci of the city, as well as demonstrates Chengdu's humanistic standpoint in practicing a new model of urbanization. It aims to open a new chapter of urban development dialogue between Germany and China.

With 19 square meters, the Hu Huishan Memorial House is the smallest museum in China. Hu Huishan died at the age of 15 in the Wenchuan earthquake on May 12th in 2008. The female student was very into literature and wished to become a writer. The memorial hall was shaped after the rescue tents in the disaster zone. Its size, area, volume and form are all similar to a tent. The exterior walls are painted gray, resembling local dwellings. The interior walls are painted pink - the girl's favourite colour. The walls are covered with the remaining items of her transient existence.

In opposition to China's typical practice of constructing enormous monuments to promote heroism and patriotism, architect Liu Jiakun dedicated his tiny memorial to a single ordinary life. His message is clear and powerful: 'Treasuring the value of ordinary lives will be the foundation of our nation’s revival'.

Liu’s vision remains open to China’s multiple traditions: the ancient, modern and contemporary, the official, vernacular and grassroots. For each specific project's design aims to deal with contemporary architectural issues with a sense of realism - an approach inspired by folk wisdom. With faith in the compatibility of traditions and realties, Jiakun Architects has been devoted to translate oriental cultural essence into contemporary architectural language. The office's search for a suitable technical approach in architecture is simply a logical continuation of the professional work on how to serve the people in need.

The following works will be shown in the exhibition 'Now and Here - Chengdu' at Aedes Architecture Forum:

Luyeyuan Buddhist Sculpture Museum | Completed in 2002
Luyeyuan is a museum for a private collection of Buddhist stone sculptures. The overall layout, resembling traditional Chinese gardens, allows visitors to experience natural space and artificial space alternatively while going through the museum. The gaps between the blocks are used to organize the light, the sculptures and the landscape. In this way, the whole museum blends into the surrounding scenery.

Jianchuan Museum Cluster - Museum of Red Era | Completed in 2007
The museum is built on the inner part of the site and leaves the outer part to commercial activities. The museum attracts the crowds while the shops promote the commercial gains of the museum. The peaceful quiet museum is in contrast with the noisy business section, which highlights the conflict and interrelation between business and culture. They support each other, resembling the interdependent Temple-Street relationship that flourished in Asian tradition.

Shuijingfang Museum | Completed in 2013
Borrowing the scale of the surrounding vernacular dwellings, the museum aims to blend into the neighbourhood context. The newly built buildings encircle the antique cellar site to preserve and dignify it. The walls are made of contemporary eco-friendly materials such as rebirth bricks and antiseptic consolidated bamboo. The project attempts to build a modern architecture with a traditional flavour.

Tianfu Software Park Cultural Center | Completed in 2010
The museum is a horizontal building that spreads out a huge amount of building volumes on the ground. The slight inclined roof is used as a walkable space and the V-shape roof forms an inclined gathering plaza. The museum creates a shared public scenery space facing the city in a high-density urban environment.

Hu Huishan Memorial | Completed in 2009
Hu Huishan, a female student of Dujiangyan High School, born in 1993, died in the Wenchuan Earthquake on May 12, 2008 when she was 15 years old. The shape of the building is based on the shelter, a commonplace during the rescue, in the earthquake-stricken zone. On the outside, the walls are plastered in vernacular way. On the inside, the walls are painted in pink, her favourite colour and decorated with the remaining items left from her. The light through the skylight brightens up the space and makes it pure and delicate. The memorial is not only for Hu Huishan, but also for every person who died in the earthquake.

West Village · Basis Yard | Completed in 2015
As a multifunctional complex consisting of various cultural activities and commercial industries, West Village encircles an entire block to form a community of collective memories and reproduce conventional lifestyles. A walkway entwining the yard connects each floor from the underground to the roof, bringing joggers and cyclists an unusual experience. It is able to sustain and develop itself yet vitalize the public life of external surrounding communities.

People Mountain People Sea - A Celebration of Everyday Life I Installation | 15th International Architecture Exhibition of La Biennale di Venezia | Reporting from the Front | Central Pavilion | 2016
The whole steel installation refers to the most distinctive feature of the West Village · Basis Yard in Chengdu - the circular ramp and public space. Little human figures are placed around the installation, creating a vibrant atmosphere. Within the steel installation, there is an interactive installation that is based on the structural design of the yard. By rolling steel balls, visitors are able to personally experience the flow and vibe of the place.

Suzhou Imperial Kiln Ruins Park | Completed in 2016
A special kind of brick, 'Jin Zhuan' was produced in Yuyaocun for pavage in the imperial courts since Ming Dynasty (15th century). Imperial Kiln Ruins Park is enclosed from all sides forming a centripetal space that echoes the inner space of traditional Chinese gardens. The main body of the museum is an abstract summary of the imperial kiln and the imperial court; thus it is rendered with a forceful mass and protruded plain eaves. The architectural complex employs various widely applied contemporary construction using brick materials, showcasing the cultural and historical essences of Jin Zuhan.

The exhibition is shown within the framework of 45 Jahre Deutsch-Chinesische Freundschaft - Kulturprogramm 2017. It is made possible by the support of the Chengdu Municipal Foreign and Overseas Chinese Affairs Office.

An Aedes catalogue will be published.
English, € 10,-
To the catalogue order 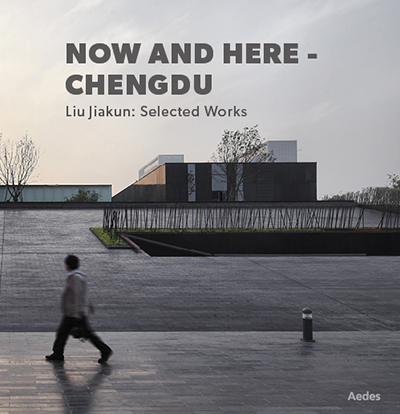