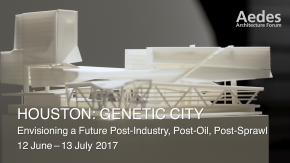 Land speculation, sprawl and the needs of industry drive the growth of Houston. It’s changing urban typologies present new challenges to the soon to be third most populous city in the United States. In ‘Houston: Genetic City’, students from the University of Houston Gerald D. Hines College of Architecture and Design along with professors–Peter Zweig, Matt Johnson and Jason Logan–consulted with Pritzker Prize laureate Thom Mayne, of Morphosis, to develop urban scenarios that respond to different phenomena.

No city in Texas is as diverse as the urban industrial city of Houston. A patchwork of suburbs connected by highways, Houston is increasingly confronted with complex environmental and social challenges. Due to the lack of a land use plan, settlements grew unplanned on the many land reserves in the greater Houston area. Drossscapes and junkspaces are flexibly transformed by informal appropriation processes. With little regulation, opportunities for innovative urban development are negotiable.

The exhibition ´Houston: Genetic City´ by the University of Houston, Gerald D. Hines College of Architecture and Design features ideas about the future of the city. Contrary to top down or formal planning models, ´Genetic City´ is based on the culture of ad-hoc planning. At the urban or even regional scale, the students produced speculative proposals that respond to large-scale phenomena. The urban scenarios have been broken into three primary themes:

Vacancies
The vacancy scenario has explored how to rebuild and rethink the development of the central business district in five distinct phases over the next thirty years, as Houston transitions from an industrial to a post-industrial economy. The challenge was to demonstrate the viability of downtown projects from an economical, cultural, social and ecological point of view in a city simply driven by the demands of the market place. This scenario envisions a blueprint, an alternative path that will bring density, transportation alternatives, infrastructural balance, and positive urban solutions for living in downtown Houston, as the large vacancy in the central business district is filled. This vision proposes a dynamic, optimistic future that is actually occurring faster than anyone has anticipated.

Energy City
This scenario relies on two premises: that energy systems fundamentally configure the way we live, and that energy changes our built landscape and environment in specific ways through infrastructure. The use of fossil fuels for transport, manufacturing, heating, cooling, and so on has had specific effects on Houston’s patterns of development, creating our sprawling infrastructure. Most of this infrastructure is monofunctional and single use. As energy systems evolve toward more sustainable models, however, there is the potential to rethink infrastructure along hybrid, multivalent lines. That is, architecture, infrastructure, and landscape can merge. Architectural proposals in recent years have approached the scale of the infrastructural, a type that is often referred to as a Megaform.

The Unzoned City
In this scenario, it was decided to work within a condition of Houston that has been defined as the ´Unzoned City´. Houston is the largest city in the United States without formal zoning. By mapping the loose network of city municipal codes and deed restrictions, the studio was left with a theoretical residual territory within the city that is unregulated. Presented as a series of maps and diagrams that illustrate strategies for operating within this territory, students explored new potentialities for architecture’s relationship to infrastructure, land-use, and Houston’s hot, humid and flood-prone environment.  A selection of section models zooms into the moments when architecture frames, connects, and integrates these elements. Ultimately, the work demonstrates what the ´Unzoned City´ promises: how a lack of zoning can generate exceptional forms of urbanism and architecture.

Many thanks for the support: