Between Art and Politics 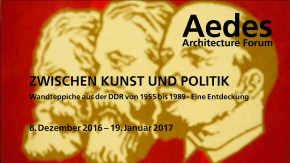 Since early civilization, the decorative tapestry has been a prized interior element in princely courts and ecclesiastical institutions. Starting in the 19th century, architects such as Gottfried Semper, Adolf Loos, and Le Corbusier also investigated the tapestry in an architectural context. But only few people are aware of the special history of tapestries in the German Democratic Republic (GDR), where they featured motifs from politics, sports, and daily working life.
Equally remarkable is the story behind the discovery of these cultural treasures. Numerous tapestries had been stored under the roof of a former GDR carpet weaving mill in Münchenbernsdorf, which resumed operations under Carpet Concept following German reunification. The tapestries were only recently discovered there by Thomas Trenkamp, the company’s managing director, and will now be presented for the first time to the general public. The 32 tapestries on display not only provide insight into East German propaganda, they also showcase the high artistry and technical quality of its weaving practices.

The exhibition focuses on the political statements and the craftsmanship of these tapestries from the GDR, which depict scenes from political and proletariat life, as well as important sporting events and national heroes.

Professor Wieland Poser from Halle an der Saale, who worked as a young man in this weaving mill and continues to be associated with the company, writes in the exhibition catalogue:
“Especially since the 1950s, tapestries were used by the SED (Socialist Unity Party of Germany) to glorify itself in events that it initiated, such as sporting events, party conventions, FDGB (Free German Trade Union Federation) congresses or central events of the FDJ (the state youth organization). It was expected that the various tapestry motifs – including emblems, portraits of political personalities from Lenin to Pieck, as well as GDR-era buildings such as the Television Tower in Berlin – would highlight through their graphic design the activities, progress and achievements of the GDR. In 1987, shortly before the end of the GDR, a tapestry was produced commemorating the 20th Congress of the youth division of the Communist Party of the Soviet Union.”

History of Carpet Concept:
As a leading company in the development of innovative textile surfaces, Carpet Concept Objekt Teppichboden GmbH was founded in 1993 by Thomas Trenkamp in Bielefeld. Following German reunification, the native Rhinelander and specialist on artistic carpets discovered the weaving mill in the town of Münchenbernsdorf in Thuringia, Germany. With a long tradition in the manufacture of textiles in the GDR-era, it resumed operations under Carpet Concept, becoming the company’s center for product development. In the carefully refurbished brick building dating back to the 1930s, the company now uses state-of-the-art weaving technology alongside traditional craftsmanship.

The East German tapestries – all commissioned by the SED – were very much in demand at political ceremonies, propaganda festivities and sporting events, and their themes were determined by the political agenda of the GDR.

In order to understand the history of the presented works, one should consider the history of the tapestry in general. The tapestry is closely associated with architecture, according to Gottfried Semper. In his early writings, he considered the origin of architecture “to lie in textiles...in the weaving and braiding, in the slight and usually richly decorated tent architecture of the nomads.” Adolf Loos also underscored the importance of tapestry in the architectural context in his treatise from 1898, “The Principle of Cladding”. For Loos, the “structural idea [develops] both in humanity as well as the individual out of the need for protection against the inclemencies of the weather.” This ranges from clothing and a warming blanket, to the tapestry in the tent and the built room. Nearly two decades later, Le Corbusier also addressed the subject, as he wrote: “We have become nomads inhabiting apartments… we change these apartments… This wall of wool that is tapestry can be taken down… rolled up… and hung up elsewhere.”

In the first half of the 20th century, tapestries in Germany served less to protect against nature, but were rather – artfully – intended for the display of power, usually political power. During the Nazi era, the tapestry had an important role as a form of propaganda, playing with ideologically determined motifs.
A few decades later, the tapestry was assigned a similar task in the GDR, where it was appropriated as socialist folk art.

An exhibition in cooperation with: