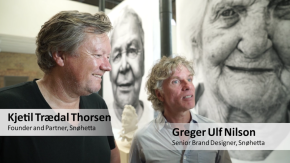 After 16 years, Aedes Architecture Forum in Berlin is again dedicating an exhibition to the now internationally acclaimed architecture and design studio, Snøhetta.
With its main offices in Oslo and New York, the firm has become a key protagonist in the international architecture and design discourse. Projects such as the Norwegian National Opera and Ballet in Oslo, the entrance pavilion of the National September 11 Memorial & Museum in New York, USA, the Lascaux IV Caves Museum in Montignac, France, the Bibliotheca Alexandrina in Alexandria, Egypt, and the King Abdulaziz Center for World Culture in Dhahran, Saudi Arabia, demonstrate Snøhetta’s sensitivity to the reciprocal relationship between structural shapes and the immediate environment. In their small-scale projects Snøhetta has likewise proven its talent in negotiating landscapes and cultural spaces. Their approach is aptly reflected in the firm’s name, taken from a mountain in Norway.

It thus seems consistent in both content and form that for their research project “Living the Nordic Light” Snøhetta examines themselves as well. In a way that is exceptional for architects, they not only reflect their own cultural origins, but also explore the dynamics between space, landscape, architecture, and people—one of the central recurring themes that Aedes addresses with its program. Furthermore, in doing so, they expand upon the ways in which architects relate to their profession today.

Invited by Zumtobel Group AG to design its annual report for 2015, Snøhetta devised a unique conceptual framework within which they created “Living the Nordic Light”, an extraordinary, profound, and poignant research, artistic, and cultural project that formed the basis for the development of the exhibition.

The exhibition “Living the Nordic Light” and the parallel show “Nightscape 2050 - A dialogue between Cities, Light, People of the Future” by LPA Lightning Planners Associates from Tokyo and Singapore are the contributions by Aedes to the United Nations “International Year of Light 2015.”