Building in the Metropolis MX 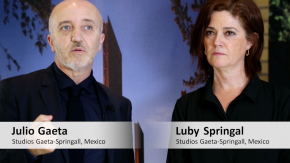 The exhibition "Building in the Metropolis MX" presents selected works from the Mexican studio Gaeta-Springall Architects. In their working process right through to realisation, architectural elements such as form, material and function serve a larger and more complex system: the City. Julio Gaeta, Luby Springall and their team take great care over designing the envelope in order to generate possible interactions through the porosity of the exterior skin. Here they set particular store by intelligent systems and technologies as the longevity and durability of the building lies in its efficiency and sustainability. Gaeta-Springall Architects dedicate themselves to space as an entirety, which they see as the “true stage of life”. For them, "Building in the Metropolis MX" means the linking of architectural, urban and social elements. It is here that they see their everyday work.

After curating this year’s Mexican pavilion “Condemned to be modern” at the Venice Biennale, the presentation at Aedes is the second exhibition in Europe for Gaeta-Springall architects, already highly regarded in their home country. In Germany, they are known for their project of socio-political relevance, the 'Memorial to the Victims of  Violence in Mexico'. This project was financed primarily with money confiscated from drug cartels and has generated controversial discussion in Mexico. The opening of the memorial last year found its way into the German media. For the first time it is explained in more detail through a spatial installation in this Aedes exhibition. Also on display are models and photographs of buildings at different scales, such as the residential building “4HousesLCC” for four families or the high rise „Siroco and Mistral Towers” in Mexico City for hundreds of families. Moreover, projects in urban space are presented, including in the Iztapalapa district and the Merced Market, in which Gaeta-Springall Architects express their position on redefining public spaces.

The clear turn towards modernity is to be found not only in the forms and materials of their buildings, but also in the fundamental approach of integrating architecture into the urban landscape through transparency and thereby building "in the city and for the city". The exhibition reflects in various ways the gradual confrontation with "their" metropolis that forms the basis of each project by Gaeta-Springall Architects. Alongside extensive research - taking in the urban surroundings, the boundaries between public and private realms, function, design and construction – the element of participation is crucial in every project. In particular, the importance of community and its interaction with every project planning stage truly distinguishes the work of Gaeta-Springall Architects. 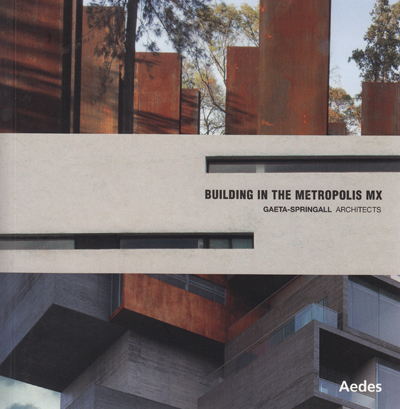