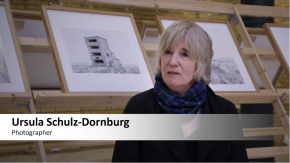 Following the exhibitions ‘Architecture of Waiting’ (2004) and ‘Tongkonan, Alang and the House without Smoke’ (2008), ‘KURCHATOV – Architecture of a Nuclear Test Site’ is the third architectural exploration by the photographer Ursula Schulz-Dornburg to be presented at Aedes in the last 10 years.

In October 2012 Schulz-Dornburg (Berlin, 1938) had the opportunity to photograph the former USSR nuclear weapons test site near the city of Kurchatov, approximately 600 km east of Astana on the border with Siberia. Here, 60 km from Kurchatov, lie the remnants of urban life - houses, streets, bridges, underground entrances etc. - which stood on the atomic bomb test site between 1947/48 and were used to analyse the destructive strength of atomic bombs. Between 1949 and 1991 around 480 atomic bombs were detonated here.

The photographs by Ursula Schulz-Dornburg depict the remaining concrete vestiges from the time of a megalomaniacal arms race and act as silent witnesses to a destroyed topography that stretches out as far as the eye can see. They present architecture constructed in the name of science, power and alleged heroism. Today, robbed of any measuring and scientific instruments, they appear like architectural sculptures in a surreal landscape, one that is contaminated for the rest of time. Yet the photographs lament nothing. The stand-alone black and white images display great clarity and depth, drawing in the viewer to become the seeker.

On another level however, through the elements of her work rooted in field research and the preservation of traces, Schulz-Dornburg saves us from forgetting. She brings back into our memories a time, shortly before the final break up of these constellations of landscape and architecture, in which thousands of unsuspecting people were exposed to the consequences of nuclear tests taking place above and below ground and animals were used as living case studies to measure the strength and effects of nuclear radiation.

Additional archive images, which Schulz-Dornburg and her assistant Aljoscha Puschkin were able to photograph in the museum in Kurchatov and in the Eco Museum in Karaganda, form the accompanying documentation in newspaper format. These photos from the time of the nuclear tests and afterwards reveal the gradual decline of the facilities that have been tracked down now by the photographer and are still latent.

The works of Ursula Schulz-Dornburg are included in the collections of numerous museums, including Tate Modern in London, Musée d’Art Moderne in Paris, Instituto Valenciano de Arte Moderno and the Ludwig Museum in Cologne. We thank her, that we are able to show this new work at Aedes.

We would like to draw your attention to a new publication, just recently published by Hatje Cantz under the title ‘some works’. The book gathers together for the first time several series by Ursula Schulz-Dornburg, including some previously unpublished, as well as the work in Kurchatov. This detailed book about the artist, presented in a case containing different materials and objects, is the product of an intensive collaboration between Schulz-Dornburg and the editor and author Wolfgang Scheppe.