Cinema of the Future 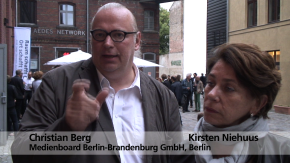 Berlin is Germany's Cinema Capital with its large variety of different programmes and events, in particular the International Film Festival Berlin. Yet there are numerous challenges facing the city's cinema landscape today. The cinema of the future cannot solely focus on new forms and techniques of presentation. Cinema's positioning in urban space also has an urbanistic, societal and design dimension. The exhibition includes four key issues tackling the physical form of cinema and its socio-cultural role in the city. It is based on two international architecture workshops at ANCB on the cinema of the future and includes the new design for the ZooPalast and its integration in the city.

Key issues of the exhibition

The Art House Cinema as Kiez Stimulator - Results of the ANCB-Workshop with The Why Factory, TU Delft, February 2011
Back to the Future. The New ZooPalast as City Animator - Presentation of the new design for the ZooPalast by the Berlin architects maske + suhren
Cinema as Urban Space - Summary of the ANCB-Workshop with the University of Applied Arts Vienna, February 2010
Cinema Capital Berlin. Facts and Figures - Research results collected by the Medienboard Berlin-Brandenburg

ANCB has realised two successful international architecture workshops on the cinema of the future and its role in urban public space. The series started in 2010 on the occasion of the 60th anniversary of the International Film Festival Berlin. The first workshop 'Berlin Motion' with the University of Applied Arts Vienna, led by Prof. Wolf Prix, analysed the interdependency between architectural and urban space and the moving image. The 2011 workshop 'Can We? Make More Than A Cinema!' with The Why Factory, TU Delft, led by Prof. Winy Maas, explored how the art house cinema typology can achieve a new function and integration in the social fabric of an urban neighbourhood, exemplified by a specific site in Berlin-Wedding.